It’s not that unusual. People from other countries do it all the time. They even have a name for it. Australians call it their “gap year”. Some folks call it a “bridging year” (not sure what country they are from). In fact, it’s regarded with the same degree of normalcy as going away to college. It’s just what young people DO. Before entering the next stage of their life. Before settling down, getting a dog and having 2.5 kids.

And why shouldn’t they? There is a lot of shit to see out there. 57,491,000 square miles of land just waiting to be discovered (not counting the oceans, I get seasick). 195 countries, a whopping 183 of which I have not been to yet. And in a year we won’t even put a dent in that! (Our best guestimate is that we will visit about 20 countries.) We might have to go around a second time. (Just kidding mom!)

So, on December 29th 2009, we shall depart. All of our worldly belongings in storage (except for everything we can jam into a 60 liter backpack). All of our friends and family but a postcard and $4.99 per minute phone call away (prices may vary). No jobs or leases or blackberry’s or safeway club cards. Just the two of us, and the world.

A lot of people ask with great concern what we’re going to do, both on the trip and when we get back. Where will we go and how will we budget?? How will we get jobs and where we will live??? That's where the title of my blog comes in...

I once met a girl in New York who was about to depart on a similar trip, and every time she got nervous about whether she was making the right decision her friend told her one thing: I challenge you to find someone, a blog or a book or a friend of a friend of a cousin’s friend, who has left everything behind to travel the world and now regrets it. I’m gonna venture a guess that she never found that person. So with fear and excitement I'm preparing to take my leap, knowing without a doubt that my (mosquito) net will appear ☺ 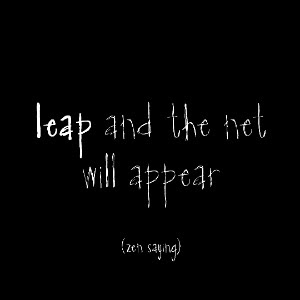