There are a handful of towns in Mexico that, according to the tourism board at least, offer a particularly magical experience. These so-called “Pueblos Mágicos” are dotted across the country, rich with culture and natural beauty.

Tepoztlan, just an hour south of Mexico City, is one of the magical destinations. Charming cobblestone streets weave steep hills throughout this tiny town, which centers around a lively market and is surrounded by spectacular green cliffs. It’s the perfect getaway from the hustle and bustle of the DF. 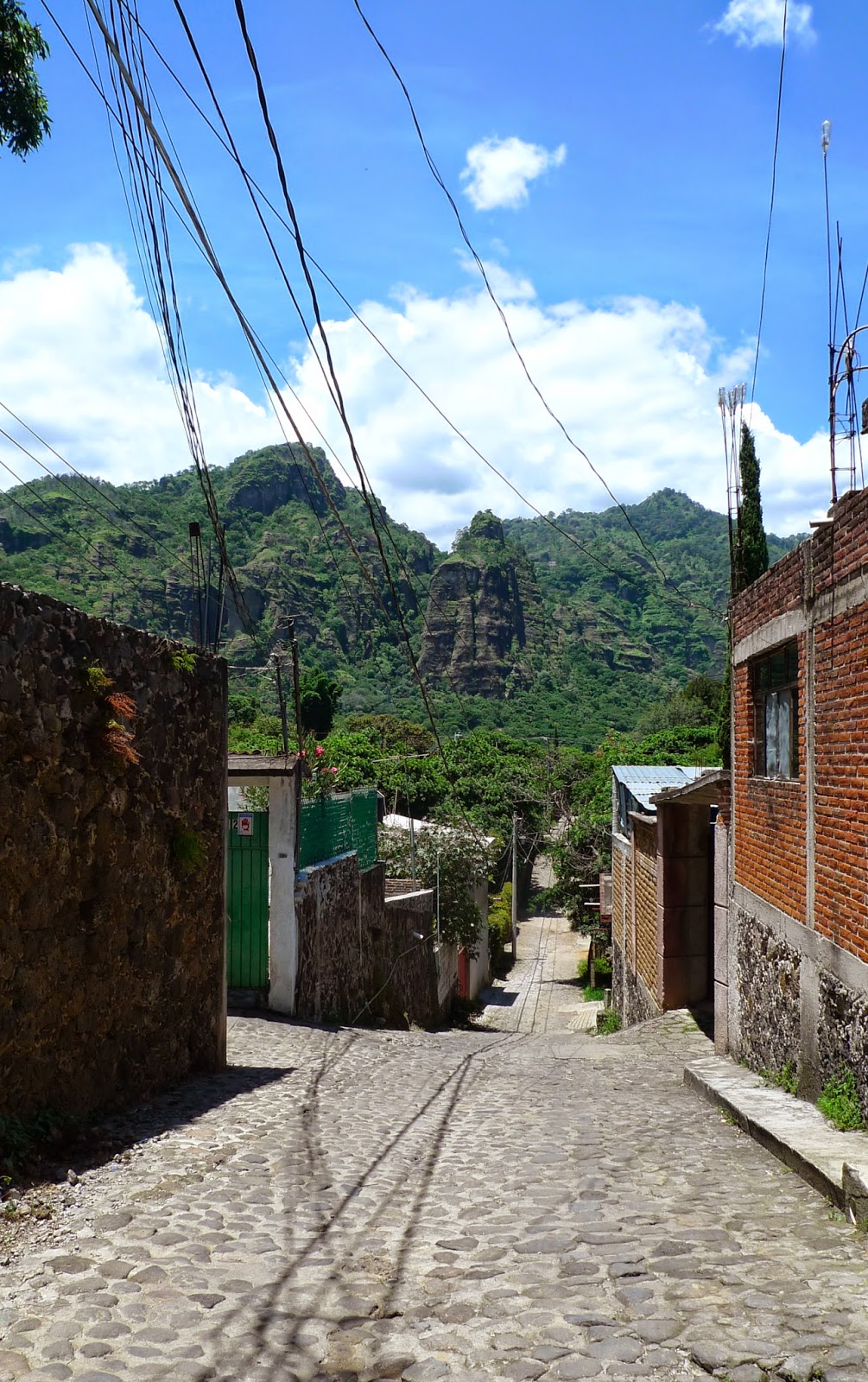 It is also home to the TuboHotel, which I’d seen before on one of those Travel Channel “strangest hotels in the world” type shows. I’m a sucker for these kinds of superlatives, so once I made the connection there was no question we had to visit.

I mean, this place is genius. It must have cost next to nothing to construct. And idiots from around the globe will pay a (relative) premium for the privilege of sleeping in a concrete tube. Throw in a sunny picnic area and a perfect little swimming pool, I’m sold. 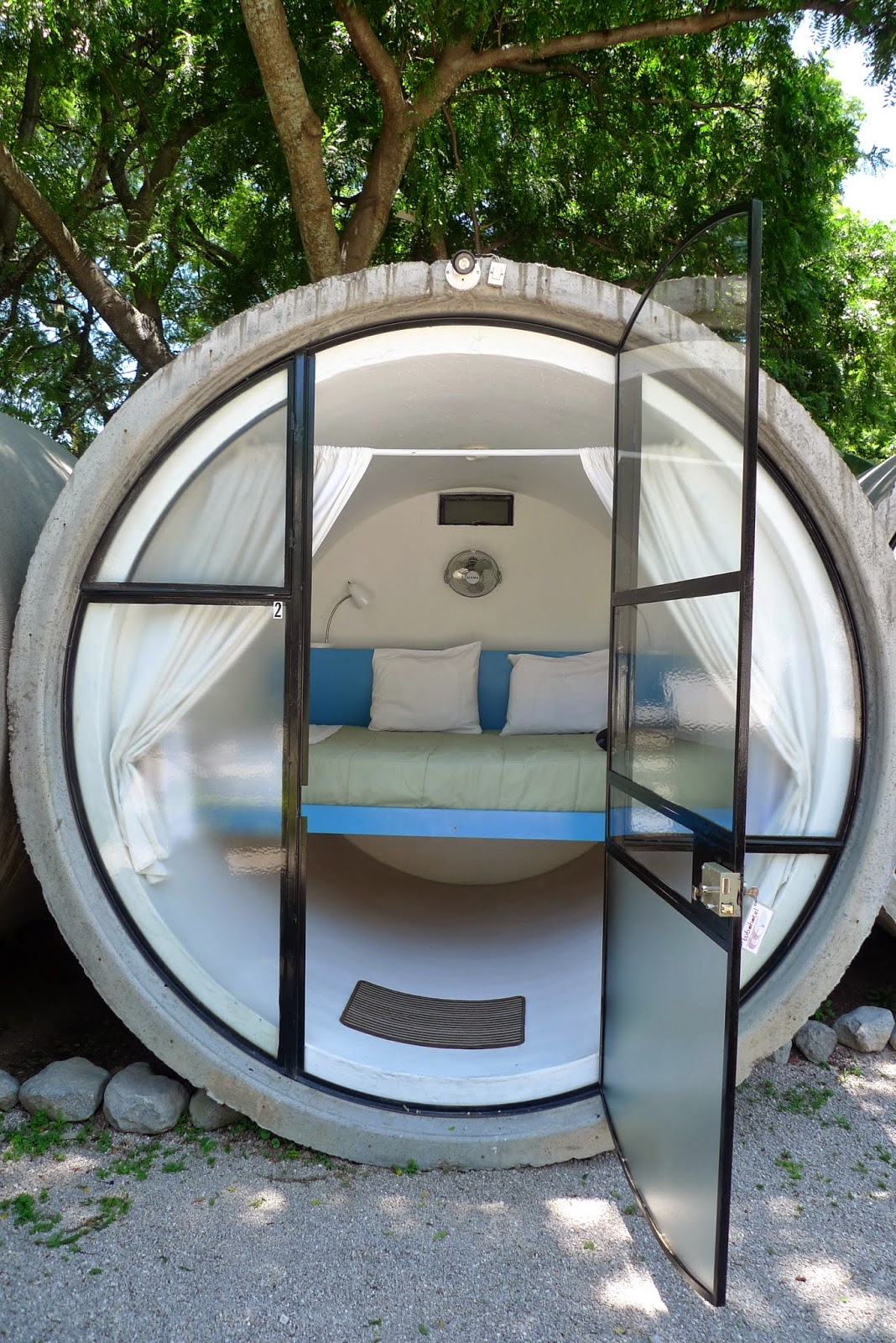 Oh, and we had the entire place to ourselves. Tepoztlan is a weekend destination, during which time the TuboHotel is usually sold out. Lucky for us, it was midweek, so we enjoyed our own strange private oasis. 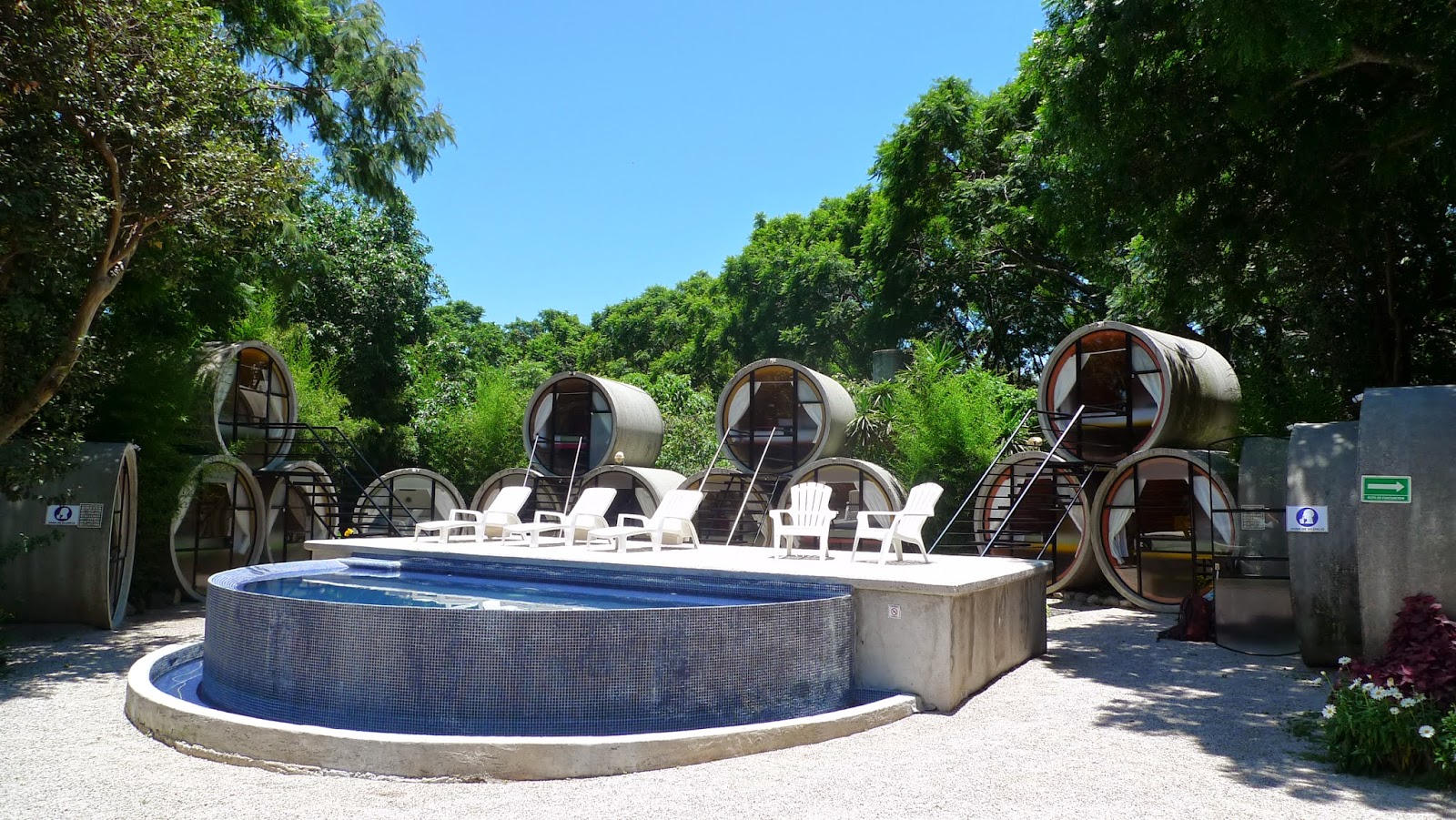 Four years later. Five thousand miles away. And about a million degrees hotter.

But I guess I've still got the same eye…

Mexico City came as a huge surprise. I was expecting dirty, crowded, chaotic. I braced myself for the unpleasant, the unsafe, and the overwhelming. I booked us there for four nights, only because I thought we'd need some recovery time after the whirlwind that was packing up our lives and departing LA. But I never for a minute thought we'd actually want to stick around.

Boy, was I wrong. Mexico City is amazing. A major metropolitan city full of hip bars and restaurants, shady sidewalk cafes, art galleries, museums, parks and plazas. It boasts amazing food, efficient public transportation, an endless array of things to do and amazingly friendly, helpful people. The language barrier was way bigger than I had anticipated, providing us with the fun challenge of brushing up on our Spanish. And we're doing pretty well if I do say so myself J

We decided to extend our stay to six nights, and squeezed an incredible amount of fun into just under a week. For photos of Mexico City (and nearby Teotihuacán), click HERE. 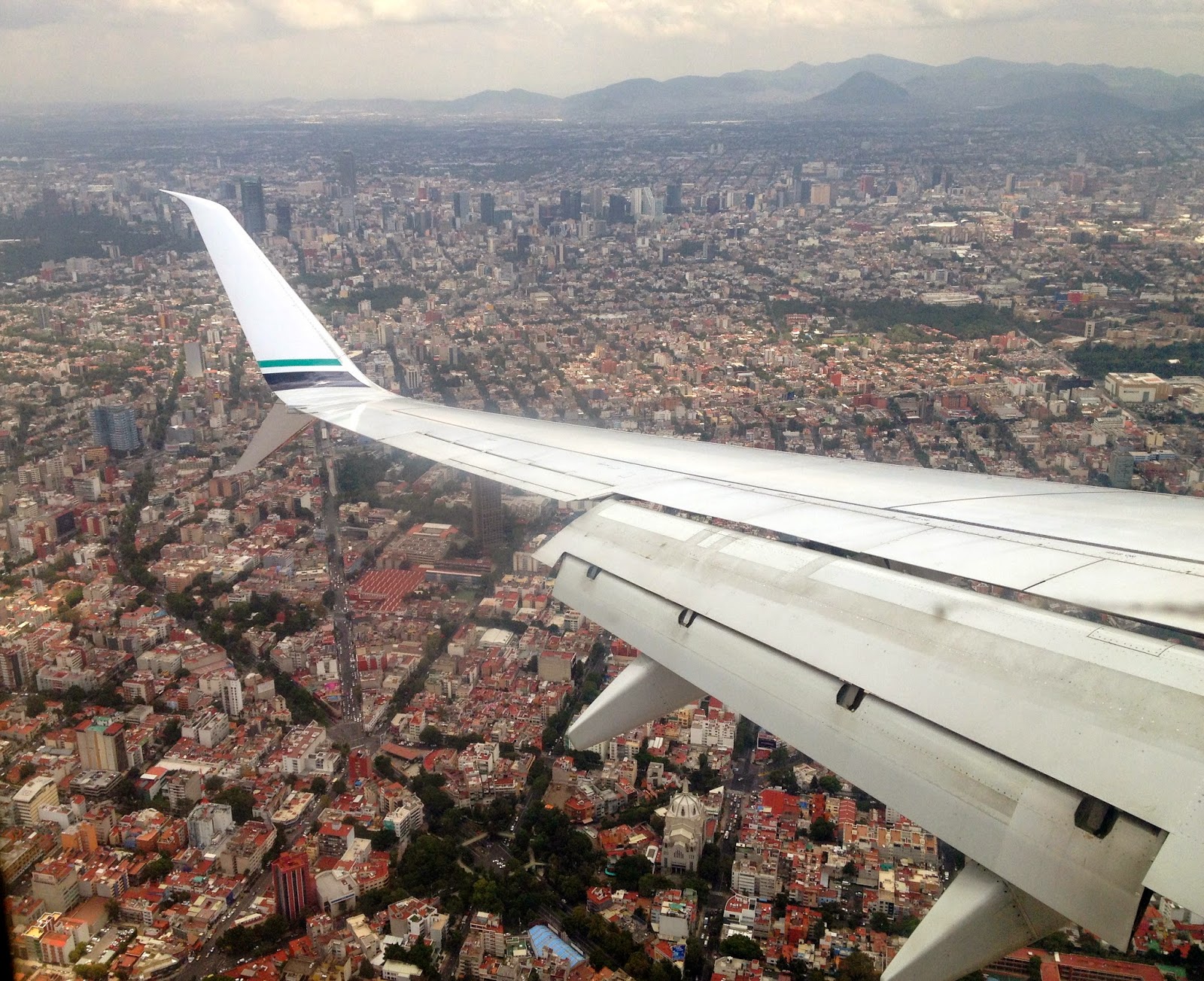 Mexico’s biggest ancient city, and the capital of what was once its largest pre-historic empire. A pilgrimage site for Aztec royalty, who believed that the gods sacrificed themselves here. Home to the third tallest pyramid in the world, built around AD 100 (before the invention of the wheel for Pete’s sake!) 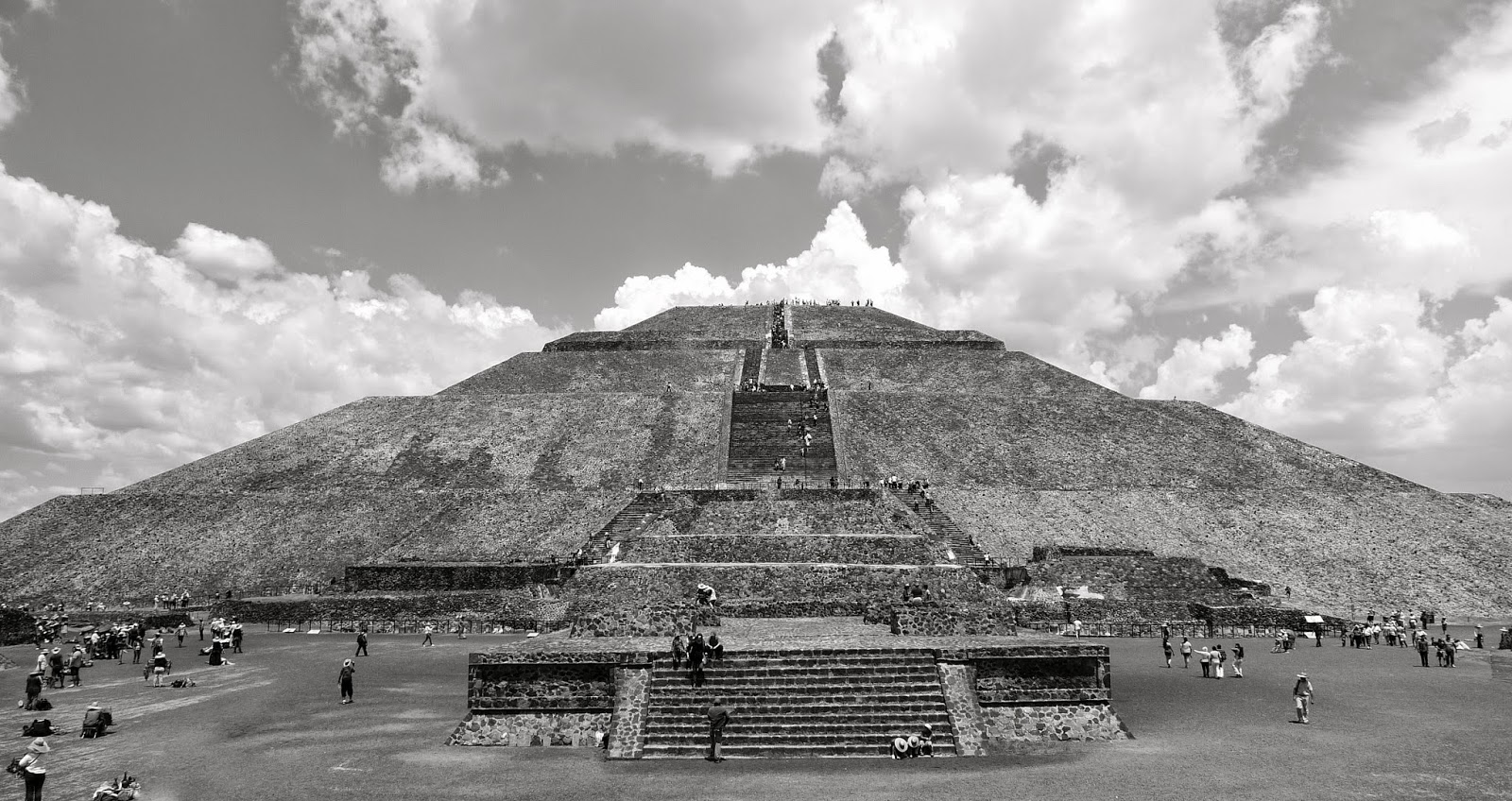 What better way to experience it, than to lace up some sneakers and climb to the top of it? 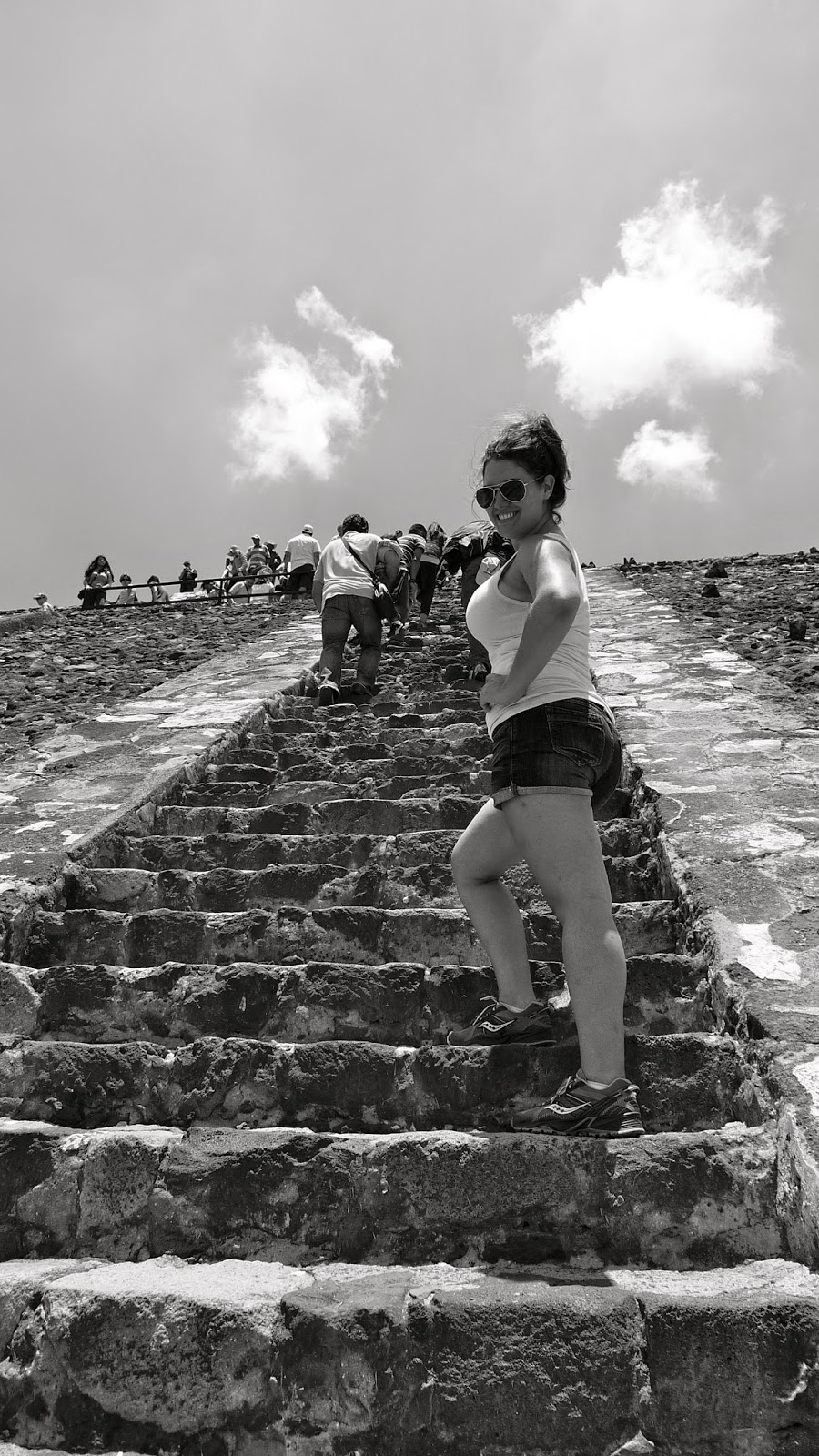 El Pirámide del Sol is believed to have been built to worship the sun god, and to this day it is a site of mystical energies. Upon reaching the top, sunburnt and breathless, it’s customary to touch the center and soak up some of that good stuff. My favorite part was the dozen or so butterflies circling just overhead, attracted to something up there clearly. Pretty magical indeed.

Saturday Night in the DF 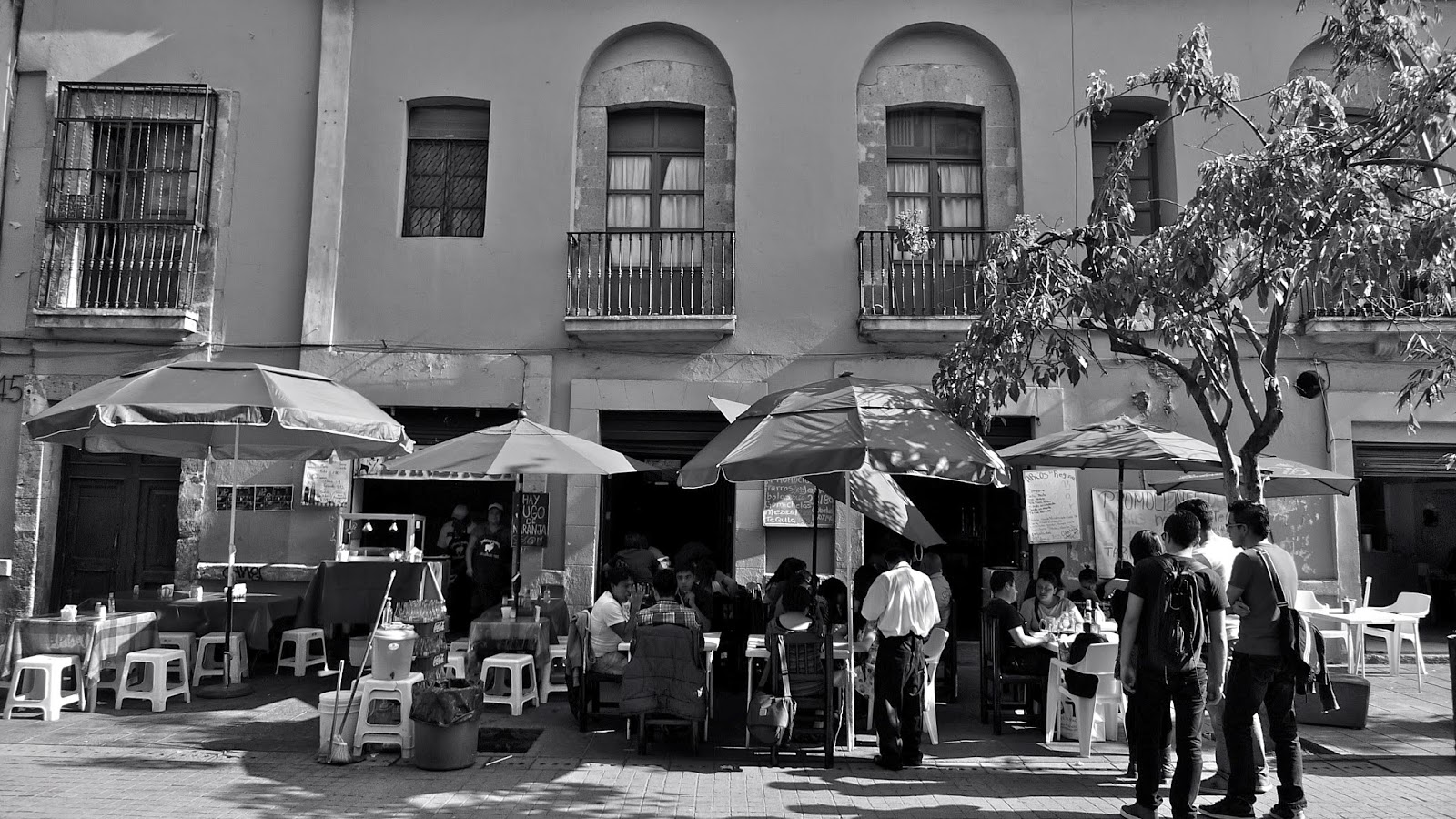 Followed by a visit to the Tequila & Mezcal Museum
(With an obligatory tasting, of course) 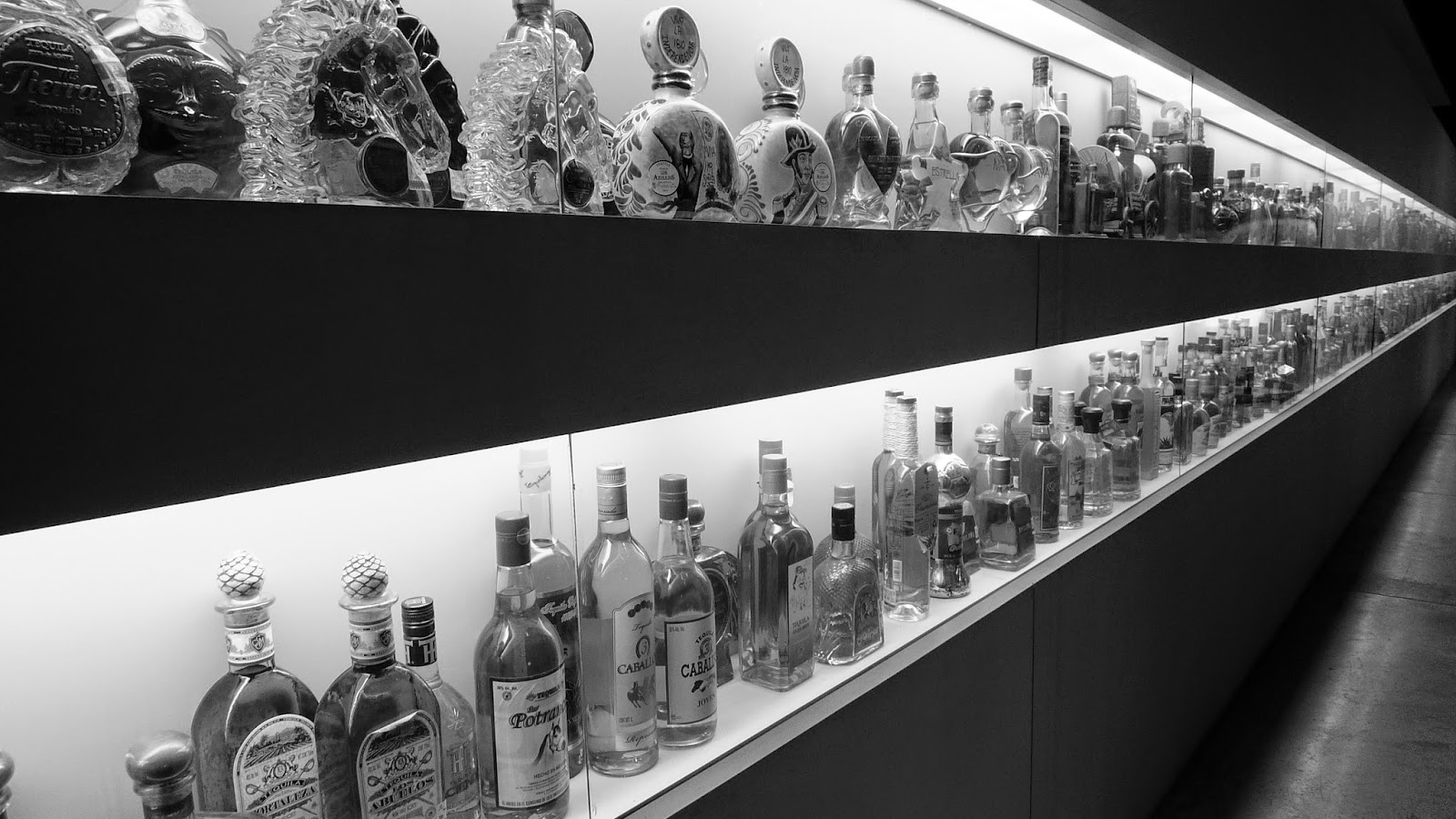 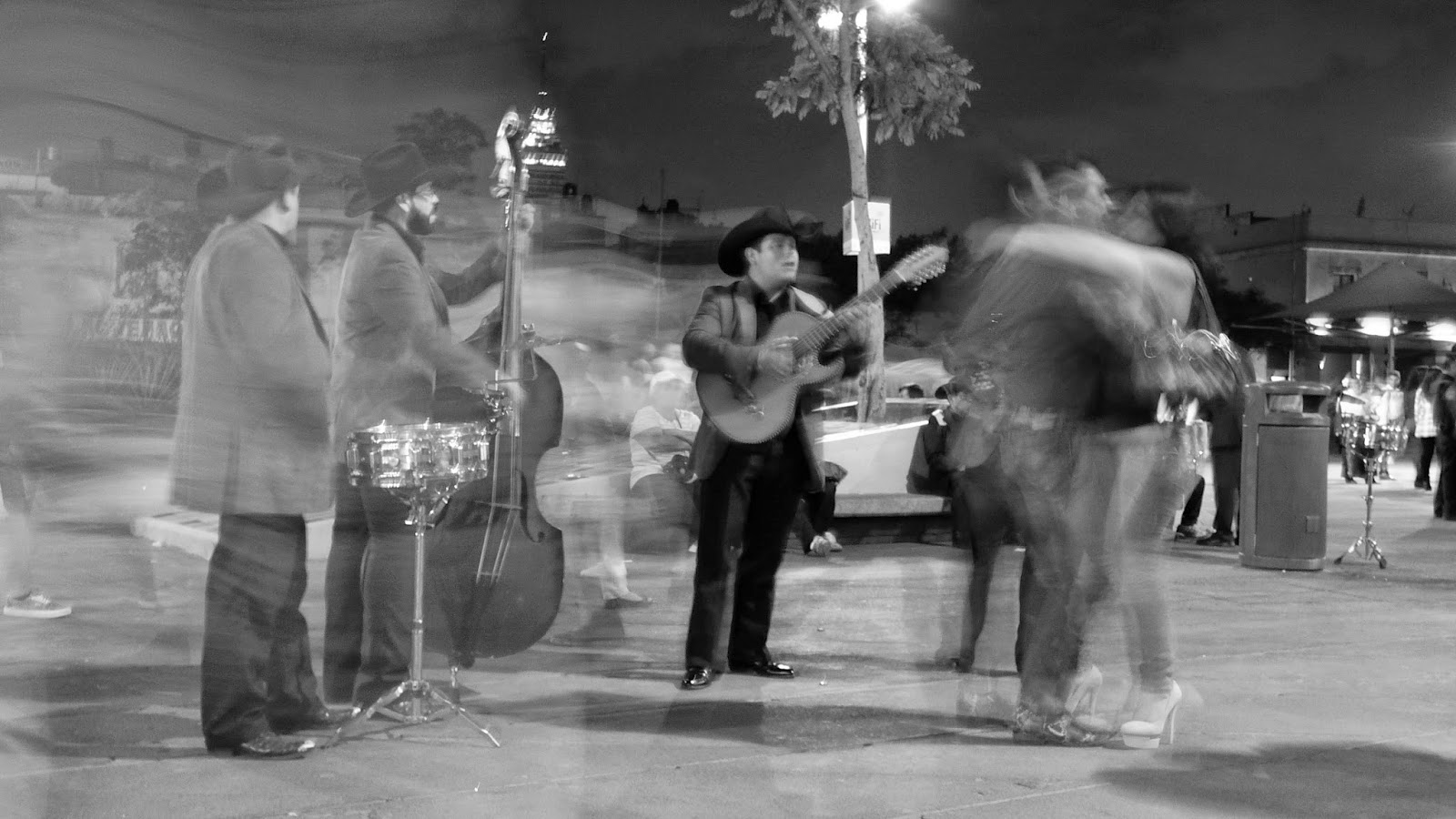 We’re starting to think that of all the places we’ve visited in our travels (outside of Europe), this is the most livable city yet.

Alright, off to eat some more tacos. Olé!

And we've already…
- Fallen in love with the street food. Seriously.
- Drank local craft beer, on swings.
- Sipped lattes at a sidewalk café in the pouring rain.
- Had a dinner date with local expats.
- Strolled through parks and parks and more parks.
- Mastered the art of the metro during rush hour.
- Stumbled upon a friend of a friend's letterpress studio.
- Enjoyed the best margaritas we’ve EVER had.
- Were shocked and horrified at the Torture Museum.
- Picked out the neighborhood we would live in, if we lived here.
- Sampled Mezcal with our new Aussie friends.
- Screamed with the crowd in a Mexican wrestling match.
- Consumed far too much tequila.
- Watched a 70’s disco dance-off.

I leave you with this. You're welcome.

On our last round-the-world adventure, I had the wise idea to stash a $20 inside the soles of each of our shoes. Rare is the emergency situation that can’t be solved with a crisp American bill, regardless of what country you’re in. Unfortunately, by the time we found ourselves in one of those emergencies, the bills were so tattered that they wouldn’t accept them.

This time, I used my noodle and came up with a solution that will hopefully protect our emergency stash from Central America's rainy season. I’m pretty much the Travel MacGyver. 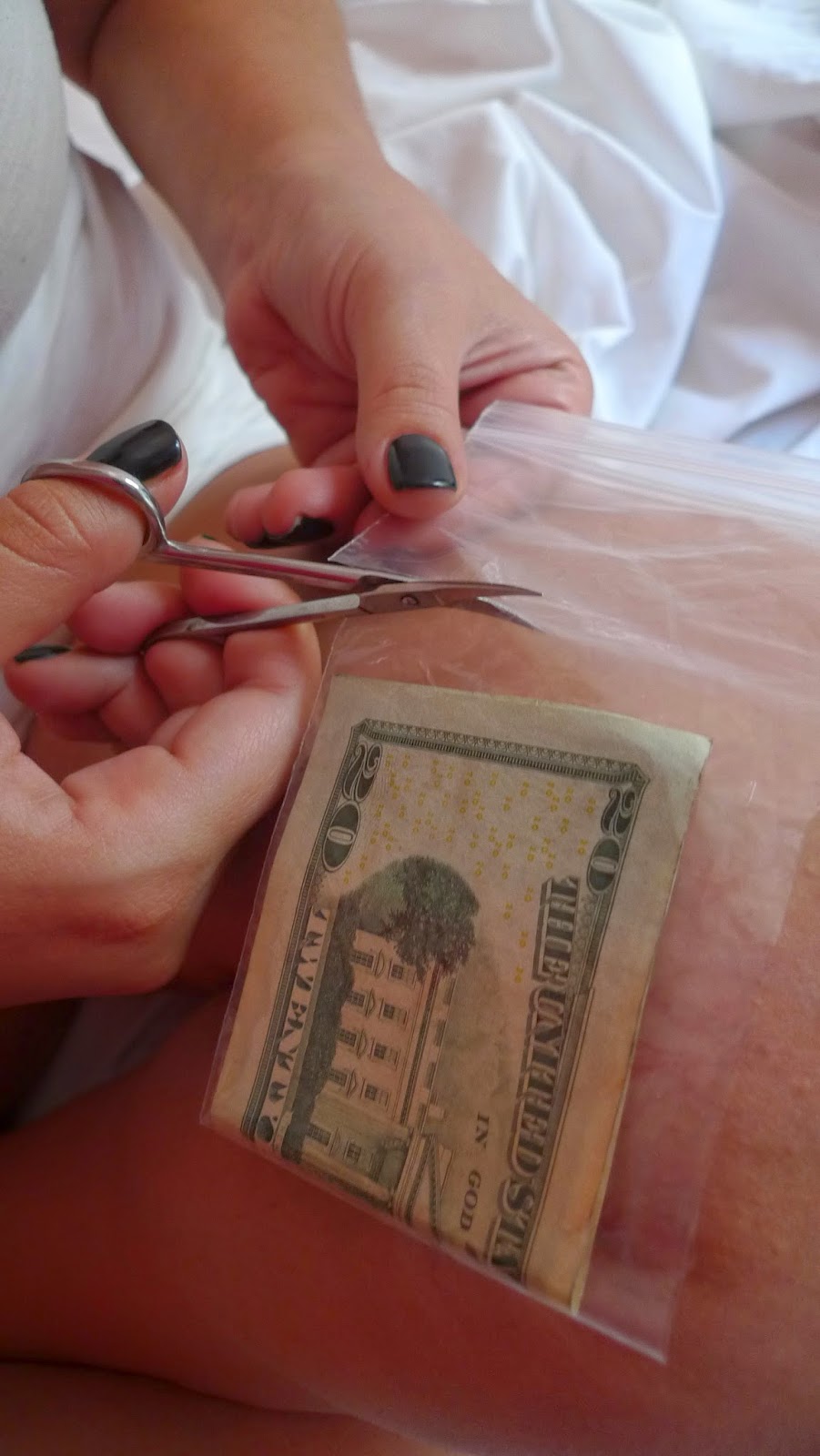 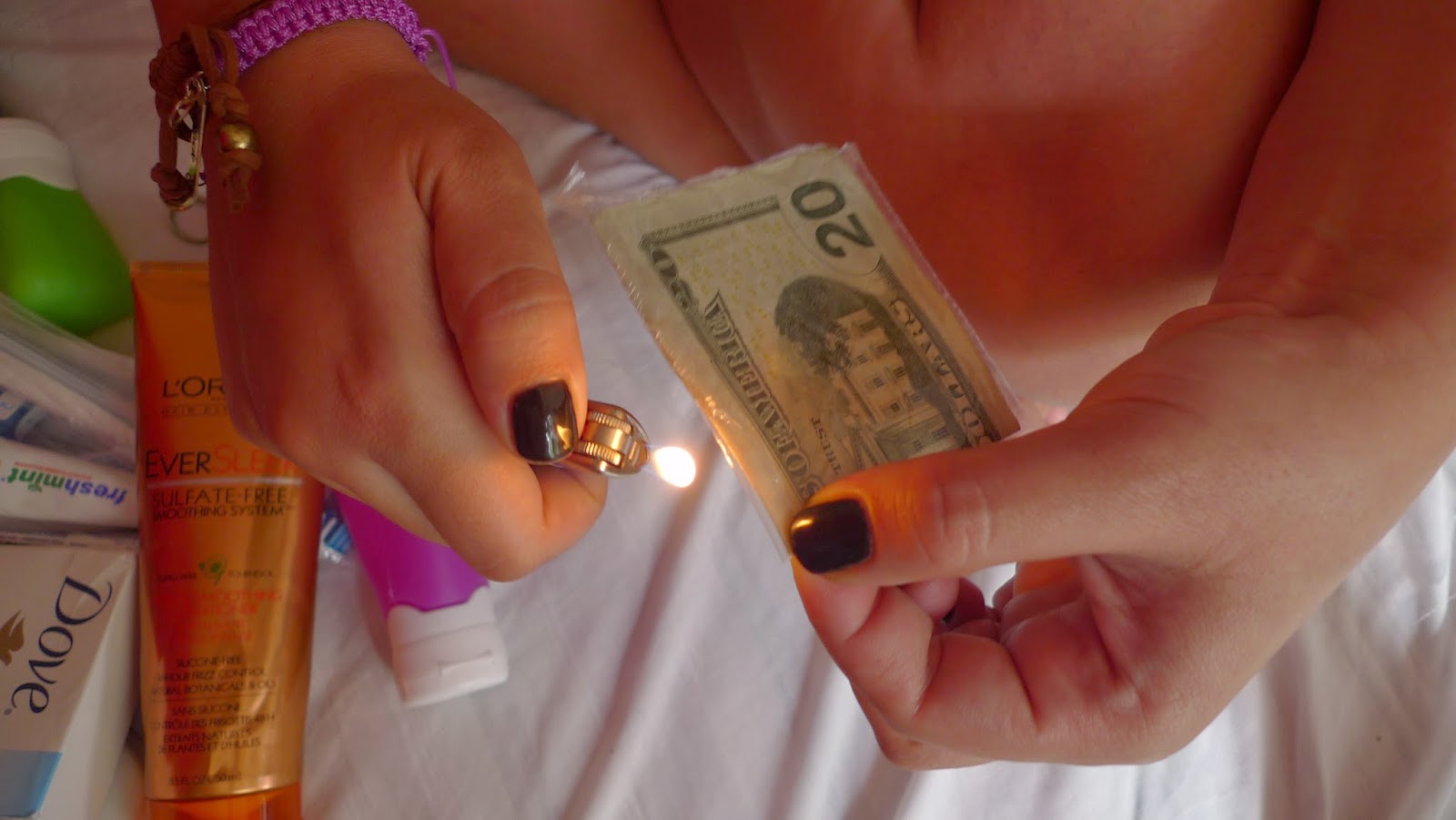 It's that time again!

The decision to go wasn’t an easy one. We’re five years older (FIVE YEARS?!?). We’re further along in our careers. We’re closer to our friends than ever before. We’re basically living the dream, on the Venice boardwalk in sunny California. Why would we give all this up? Are we crazy??

The short answer, I suppose, is yes. Crazy for traveling. For meeting new people. For seeking the unfamiliar and in turn finding an unforgettable adventure. For that particular feeling of freedom that we’ve only ever known during that year we spent traveling the world. The year that’s on display all over the walls of our beachfront apartment. The year we haven’t stopped thinking about since the day we got home from it, three and a half years ago.

When our final flight touched down at the end of 2010, we had high hopes of getting a few freelance gigs, stashing some cash, and leaving again in a year. And then, the inevitable happened. We got full time jobs. Bought a new car. Signed up for a cable+phone+internet package. In other words, we became functioning members of society again. We got engaged. We married, over an incredible weekend in the redwoods surrounded by those we love most. We started making responsible investments. We even began talking to a real estate agent. We filled our tiny apartment with all the stuff we had shed the previous year. It’s incredible how quickly you fall into the life you left behind, how fast you accumulate all the things you thought you didn’t need anymore.

But that longing never faded, despite how much we tried to ignore it. It peaked over this past New Years Eve, sitting in a dive bar in the middle of the Arizona desert. Together, we tried to recount our favorite moments of the past year of our lives. Okay, ANY moments of the past year… and pretty much drew a blank. What did we DO for the past twelve months?? By contrast, you could name any date in 2010 and I could tell you where I was, what I did there, who I was with, what it tasted like, smelled like, felt like… Every moment of my life that year was so unbelievably palpable, cause I was truly living it like never before.

The years that have passed since our round the world trip have flown by in a blur of work, TV shows, happy hours and hangovers. When every day/week/month is relatively the same, it’s alarming how quickly time passes us by. We know we are incredibly blessed to lead the lives that we do, and by no means take that for granted. It’s just that the year we were gone, with a new experience inherent each and every day, felt like a lifetime.

So, that NYE we decided it was time to start living again. Slow things down. See the world. Challenge ourselves. Take a leap of faith. Is it risky? Of course. Are we terrified? Absolutely. Might we someday regret leaving all of this behind? It’s possible. But we’ll never know until we try. And we’re so very grateful that the desire burns in both of us, equally, to cast off into the unknown yet again. 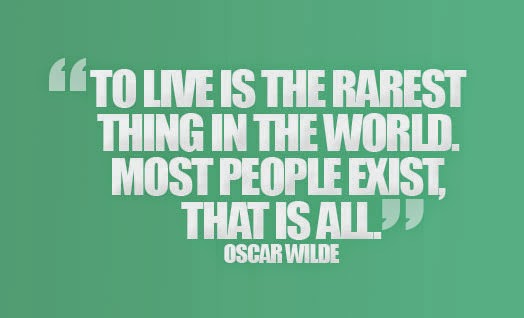 This time, it’s a little different. We aren’t trying to circumvent the globe – Our path is a bit of a mess actually. We don’t have a specific time frame we’re trying to adhere to. And, biggest of all, we’re hoping to end in Europe for a few years. With Reece’s Irish citizenship and our recent holy matrimony, we can now live and work anywhere in the EU.

Our plan, roughly, is as follows:
(those awesome folks who want to meet up with us, take note!!)
-  Three months in Mexico and Central America (most likely Guatemala, El Salvador, Honduras and/or Nicaragua)
-  Home for 1-2 weeks in October
- London for Reece’s sister’s wedding October 19-24
- Two months in Spain and Morocco
- Xmas with Reece’s family in the Florida Keys
- ?????

Tentatively, we’d like to spend a few months in Southeast Asia after the holidays. But if we’re tired of traveling by then, maybe we’ll shoot straight over to Europe to look for work. Or, who knows, we could come crawling back to LA broke and homesick. Most importantly, we plan to listen to our hearts and do whatever the heck we feel like. Which is pretty much the best plan we've made yet.