The Journey to Hang En

We almost didn’t come to Phong Na National Park. The trip would be difficult, physically and logistically. The weather could be uncooperative. The thing we most wanted to do there, an overnight trek into the third largest cave in the world, was both expensive and daunting. I’d read tales of thigh-deep river crossings. Leeches. Rain and mud and impenetrable jungle. So clearly, we decided to do it. I mean, how many times in our life would we have the opportunity to sleep in a cave?!

And you know what? There were in fact several river crossings (41 each way, to be exact). I did encounter leeches (3 of them). There was rain. There was mud (oh so much mud). There was jungle like I’d never seen. Twelve combined hours of trekking, in soaking wet socks. And it was one of the coolest experiences of my entire life.

The day didn’t begin well. We were running late (as usual). We scarfed down a frantic breakfast with eight minutes to spare before our pick-up. Then we waited. And waited. Anxious. Jittery. Doubtful. Maybe we got left behind. Maybe it’s a sign we shouldn’t go. We haven’t paid anything yet. We could easily go back to bed right now.

We finally inquired with the hostel staff and, sure enough, the tour company had forgotten us. They sent a driver over to pick us up. We were those people strolling into the tour office a half hour late. Great. Now we missed the safety briefing, and our group hates us.

After signing our life away we were transported about an hour into the jungle, which is very newly open to the public. The area played a huge part in the Vietnam war, and has one of the highest concentrations of unexploded bombs in the world. In other words, not the kind of place you want to go roaming around without a licensed guide. Many of the caves here were only discovered recently, including the largest cave in the world – Hang Son Doong – which received its first visitors in 2013. For $3,000 each, we too could have witnessed its splendor! Maybe next time.

After being outfitted with “Vietnamese Chuck Taylors” (perfect for navigating slippery terrain and quickly draining river water), gloves and helmets, we were on our way. 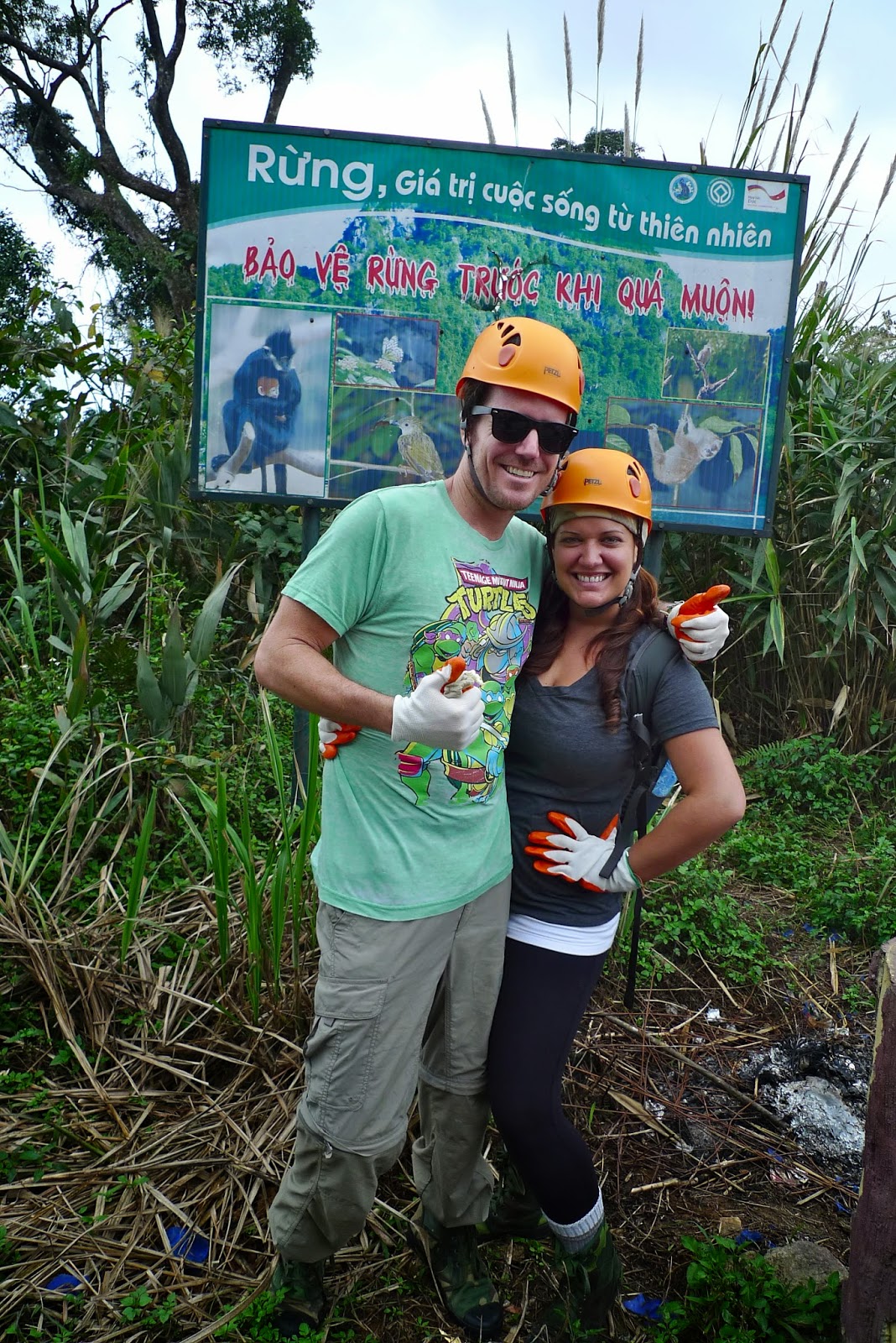 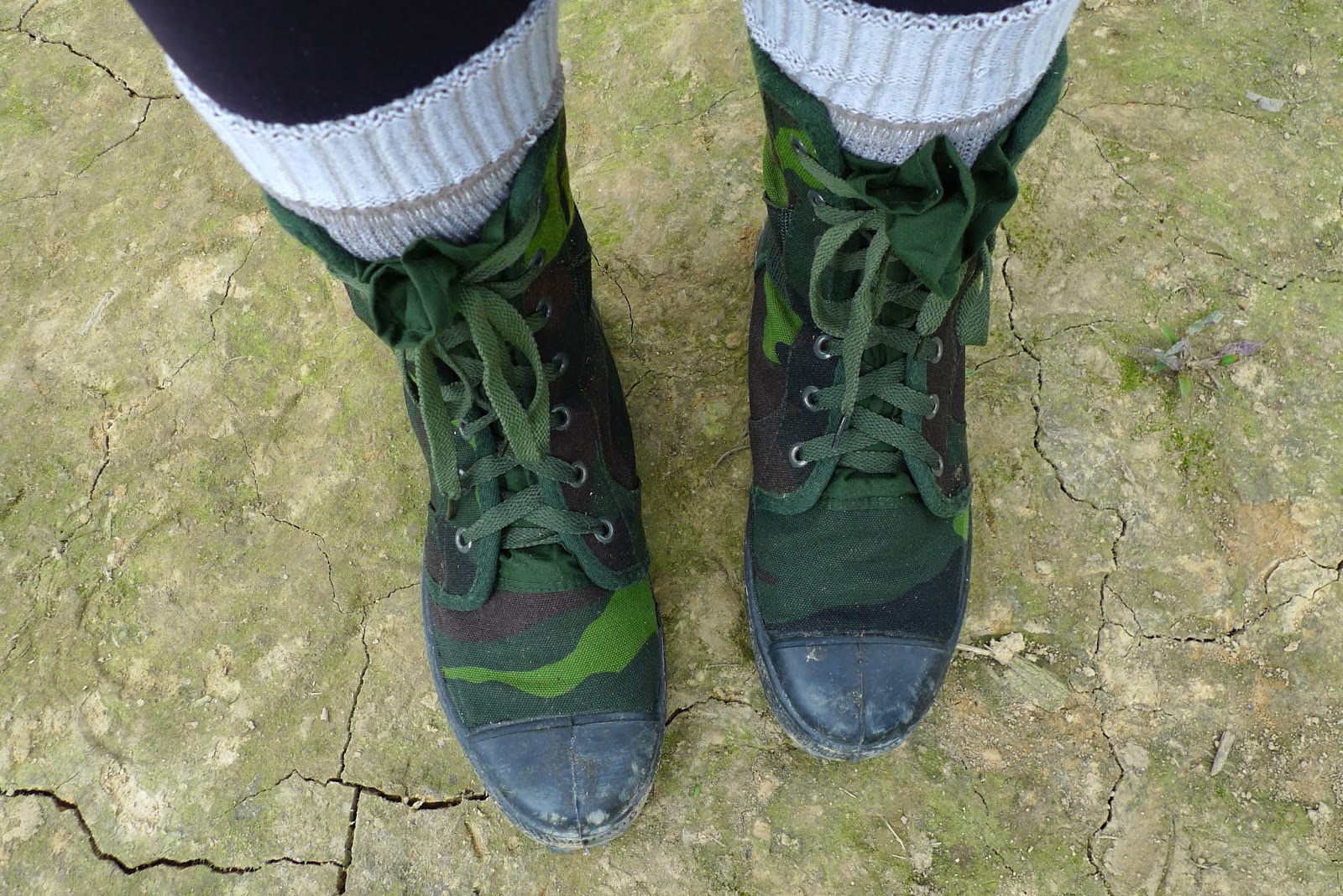 A steep and treacherous decent to the valley below. Our first river crossing. Then another. And another. A picnic lunch of fresh bread, Laughing Cow cheese wedges, tomato, cucumber, bananas and dragon fruit. Oreo cookies. A pee stop in the dense foliage, careful to avoid poison ivy. Walking walking walking. The blessing of beautiful weather. Good conversation. High spirits. Wet legs and wetter feet. Rivers with such a strong current, we’d form a human chain to help one another across. Jaw-dropping landscape. A remote minority village. The village chief. Children. Puppies. Monkeys. A lady bug. Blistered toes. Sore backs. Six harrowing hours later, we reached the entrance to our destination. And that’s when the fun really began. 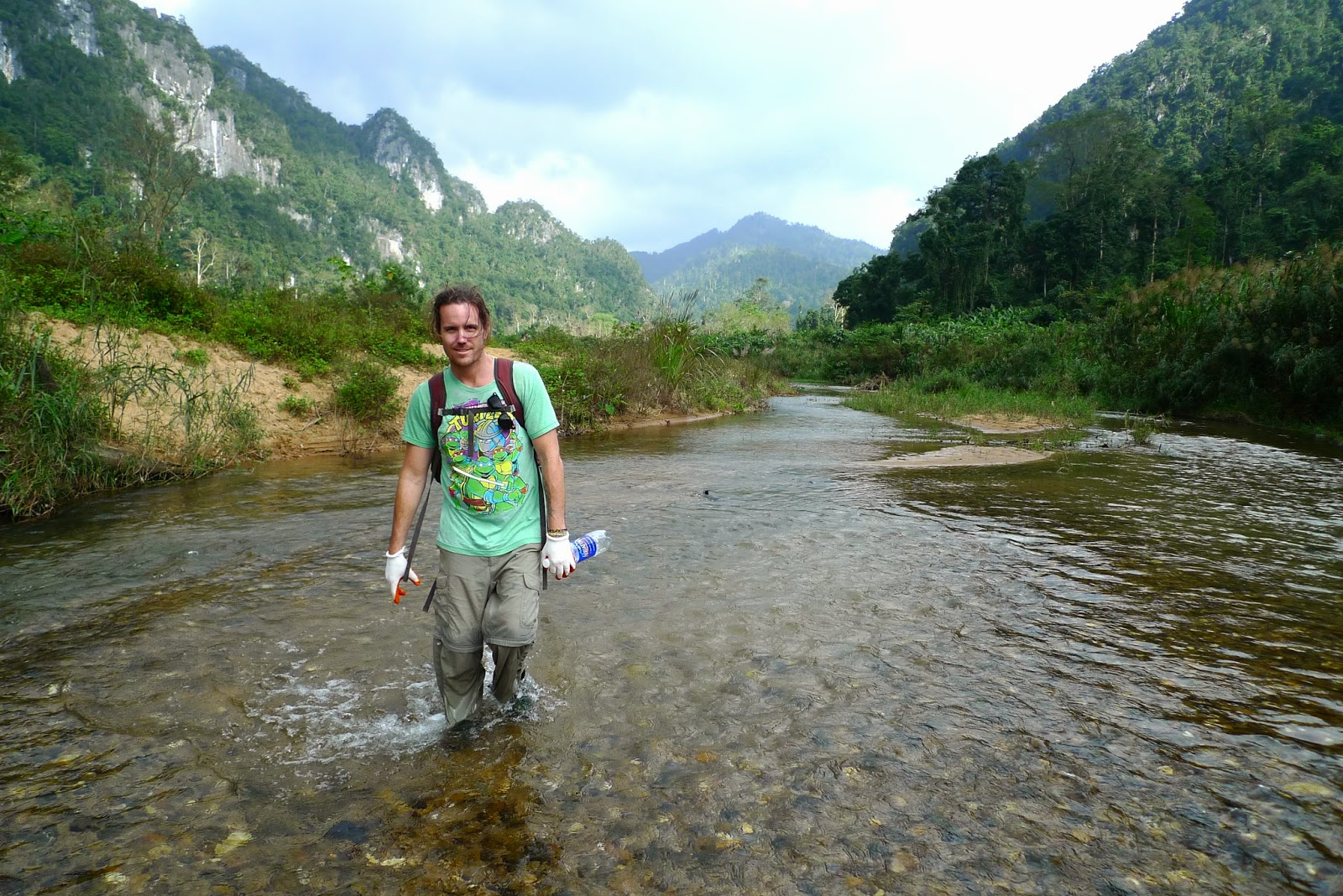 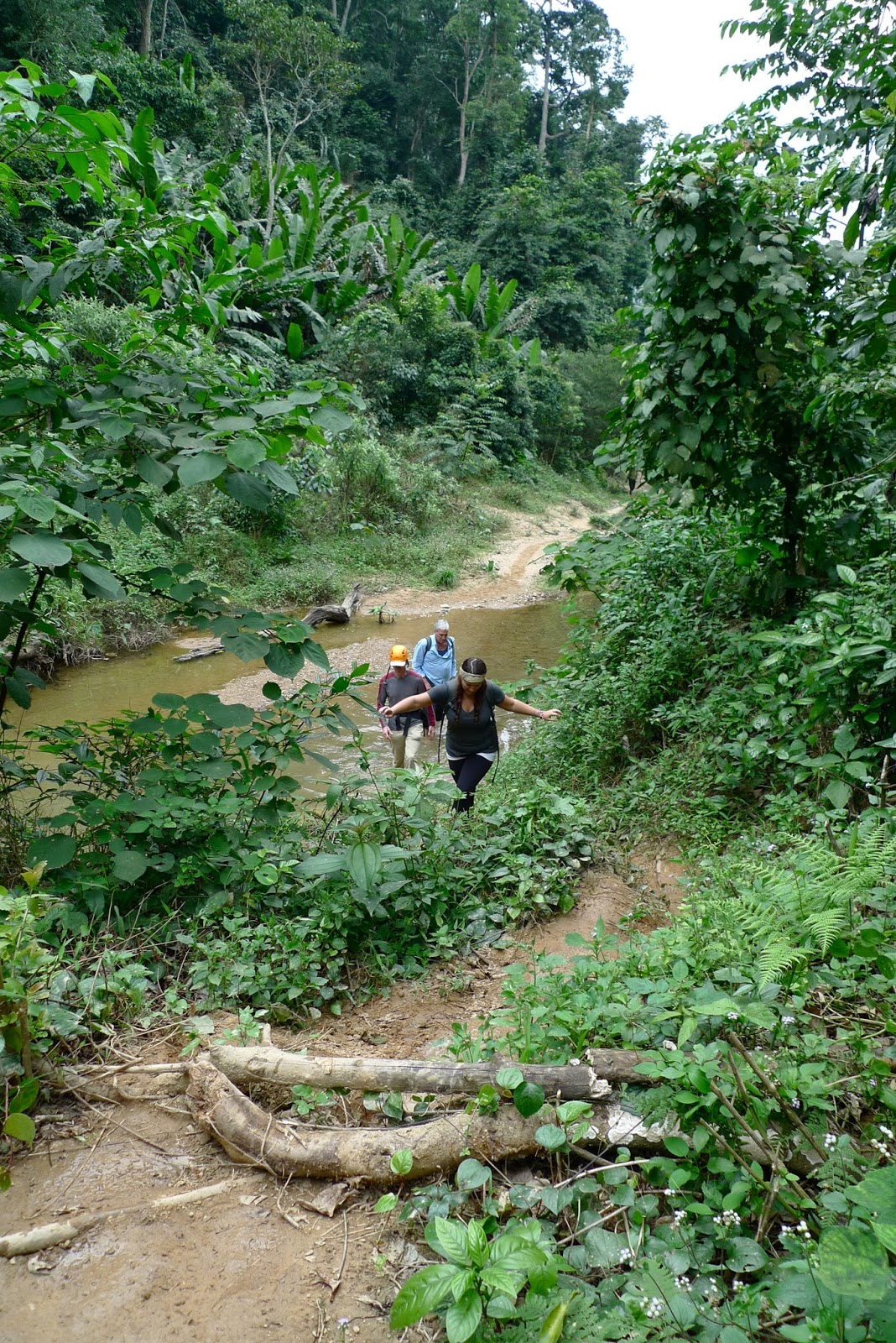 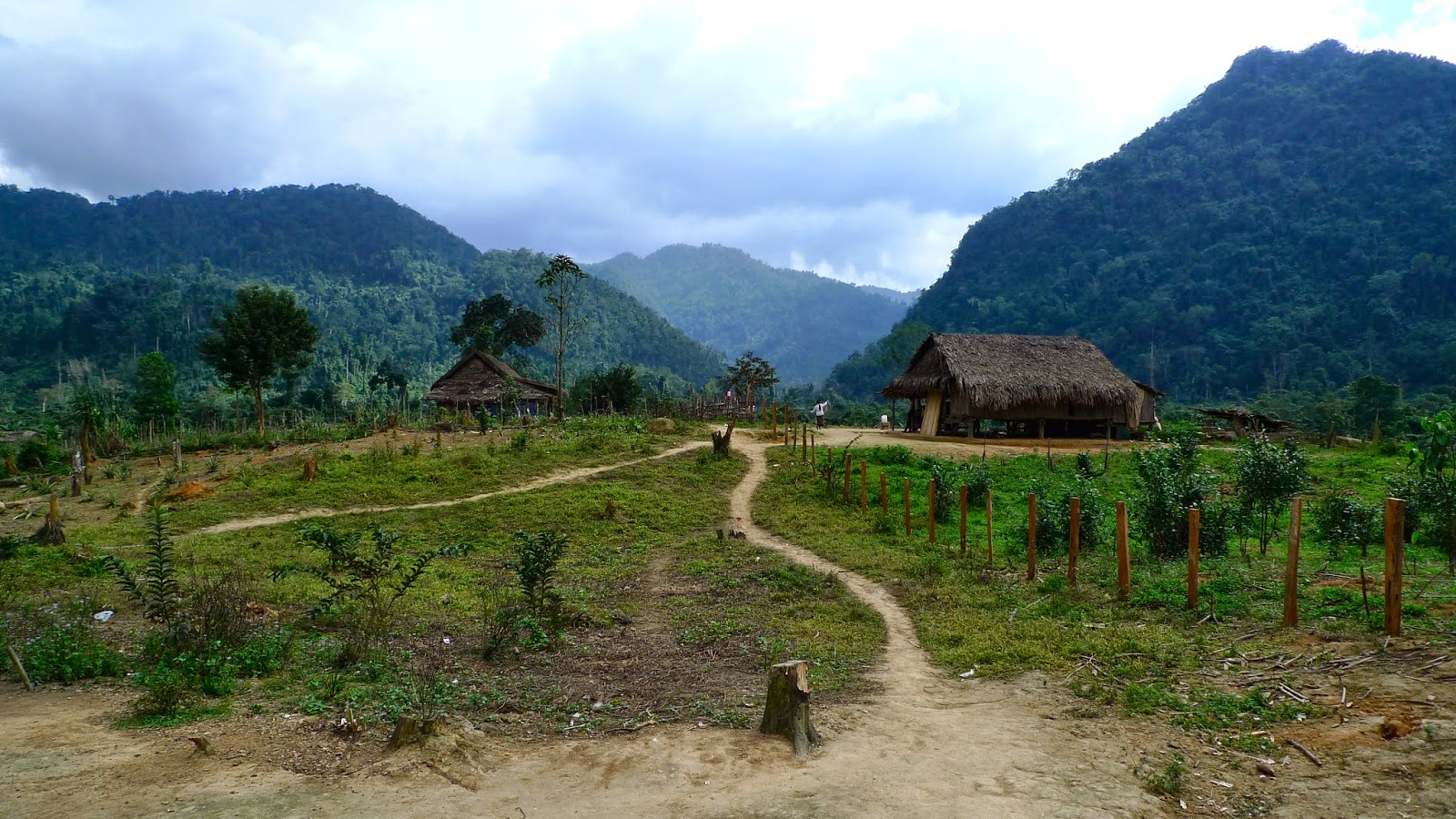 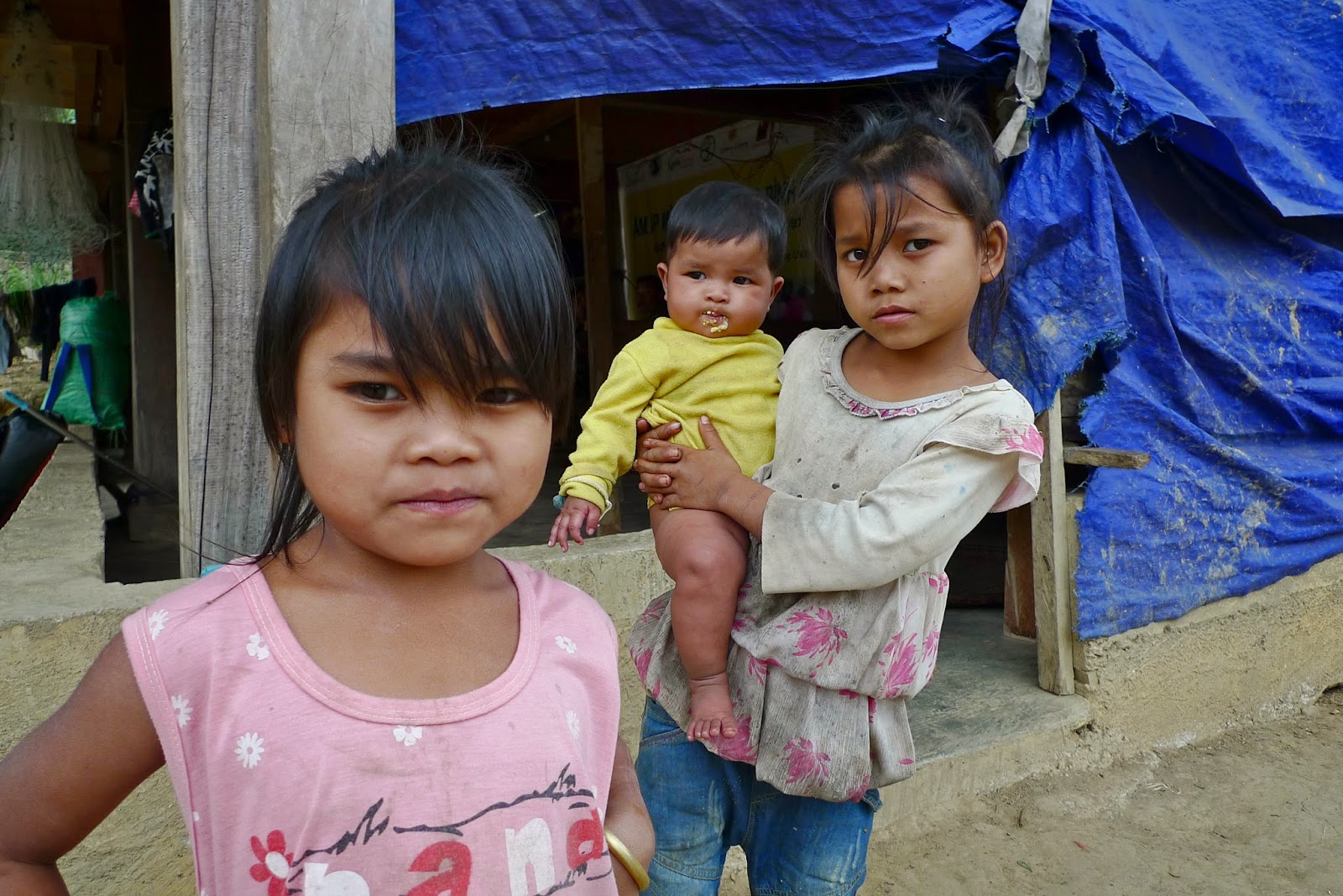 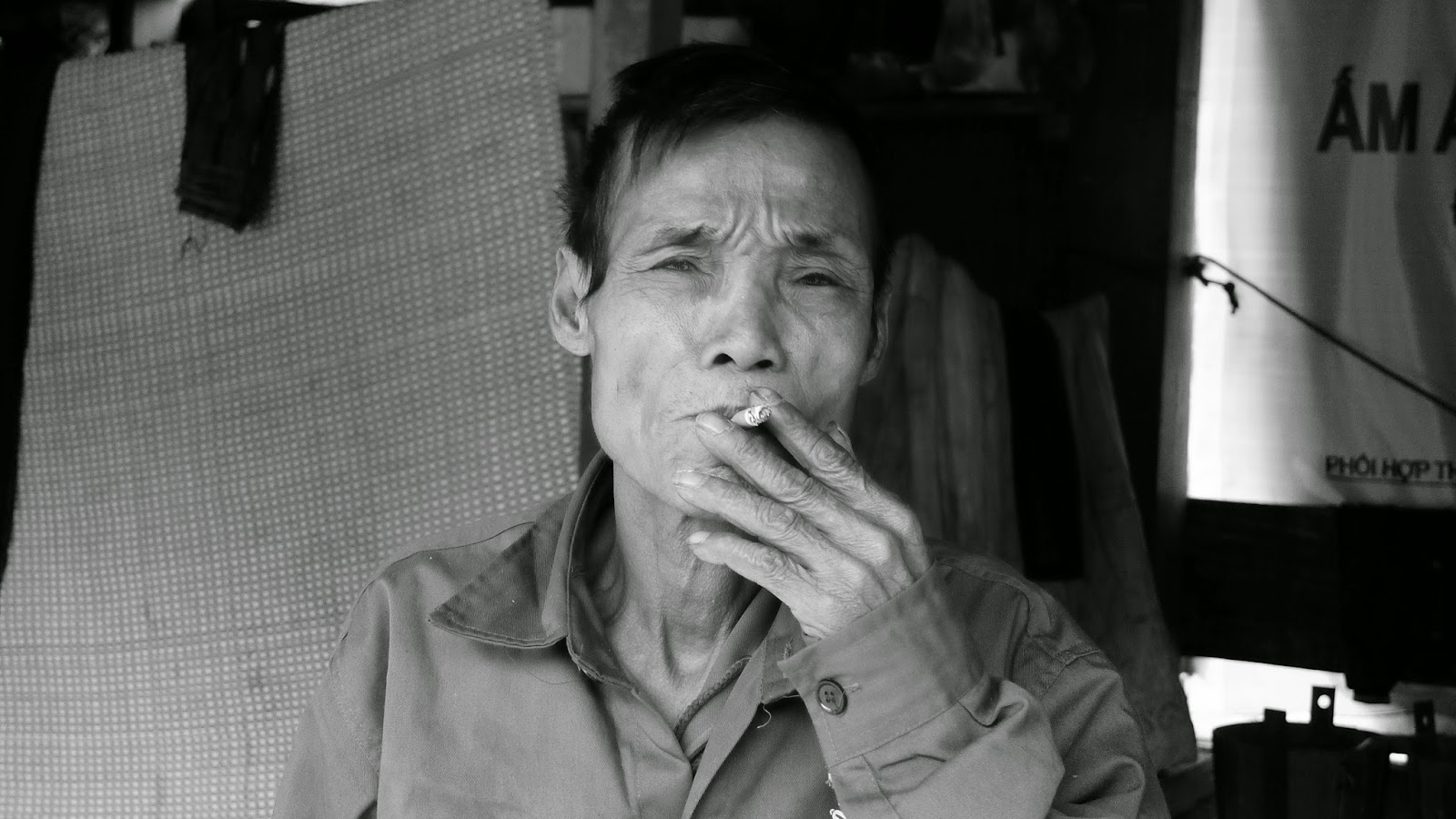 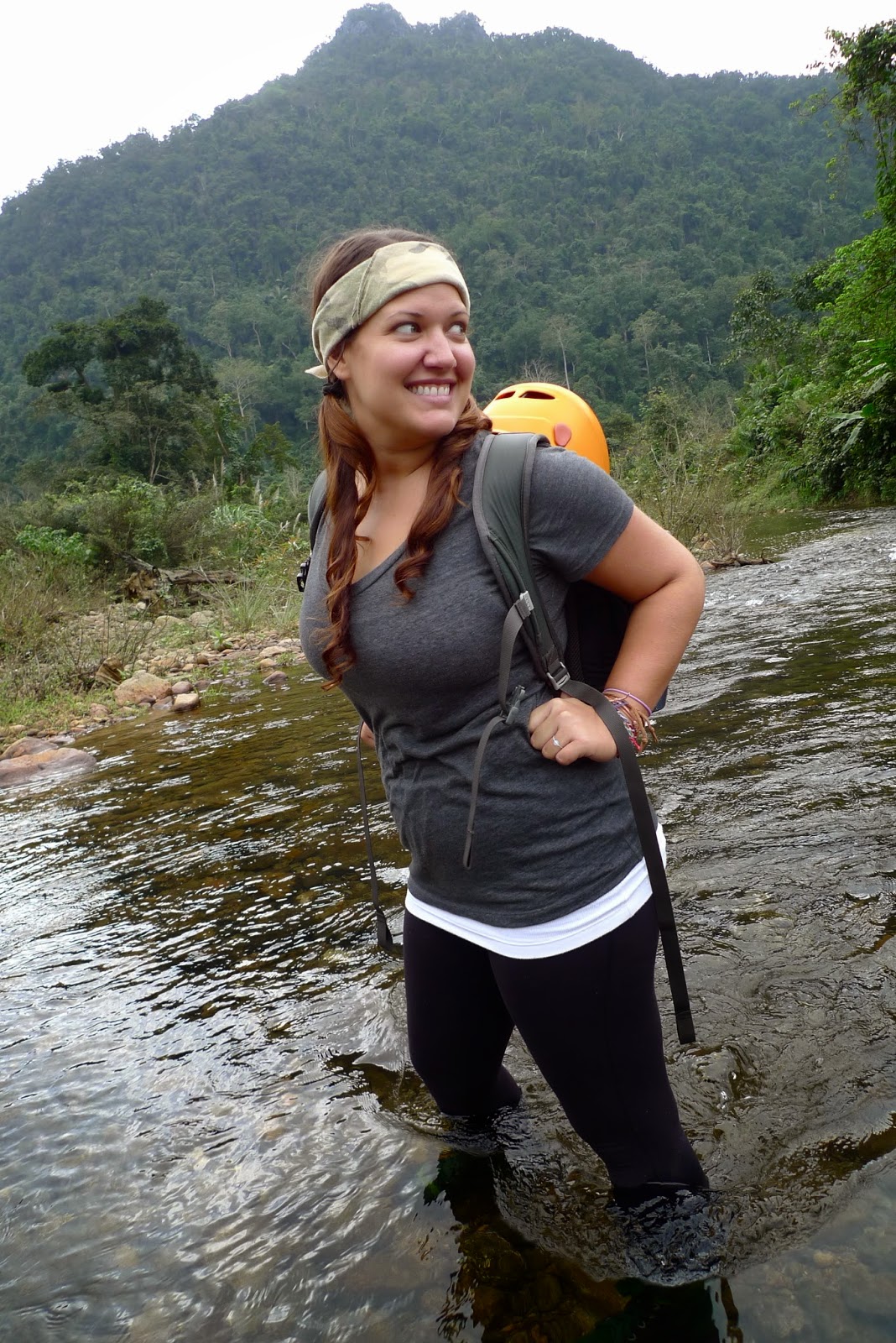 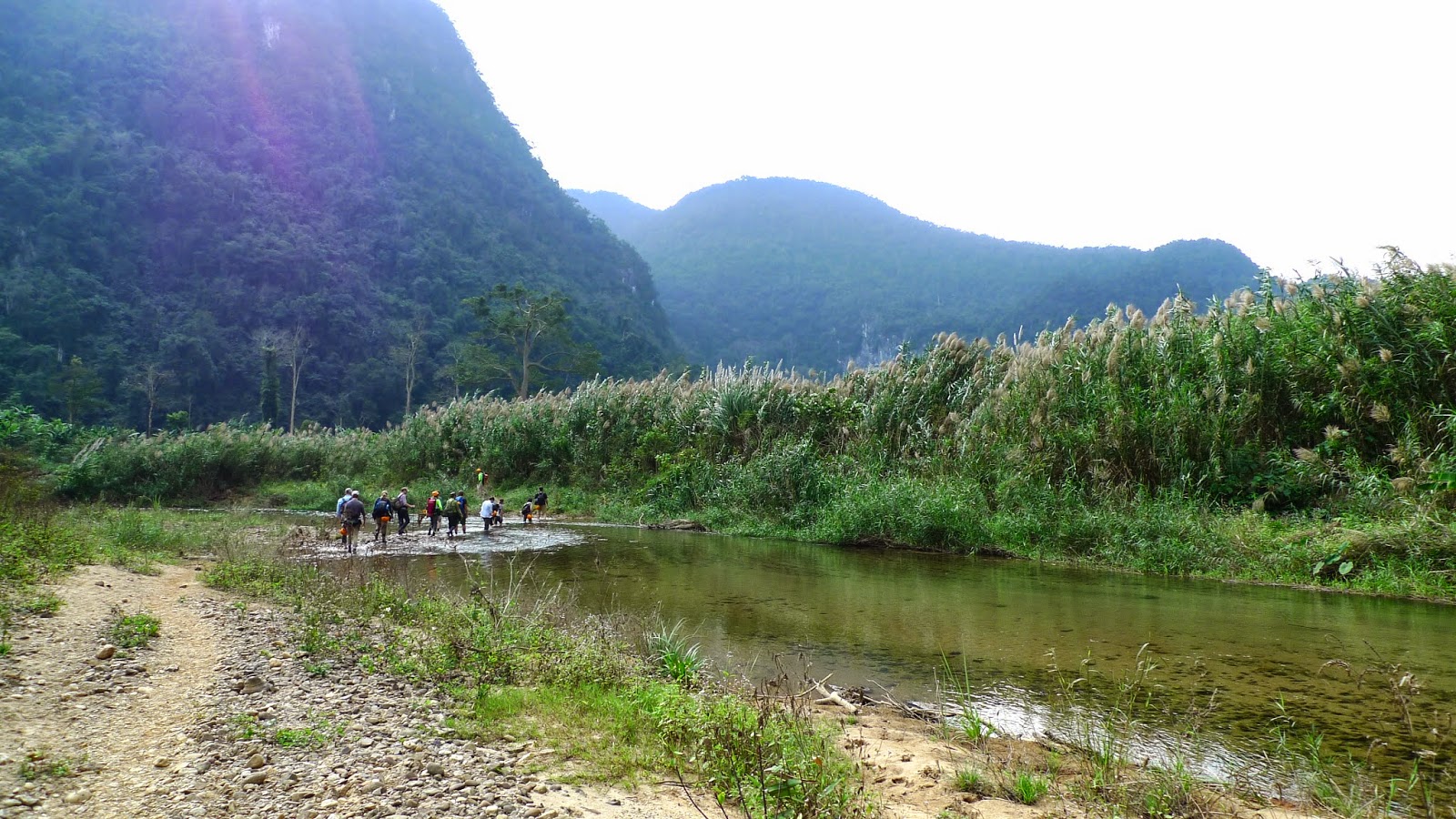 The entrance to the cave was accessible, of course, by water. Upon reaching the rocky beach inside and switching on our headlamps, we were met by a wall of boulders we must tediously climb before catching a glimpse of where we would sleep for the night. And when we did, it was magic. 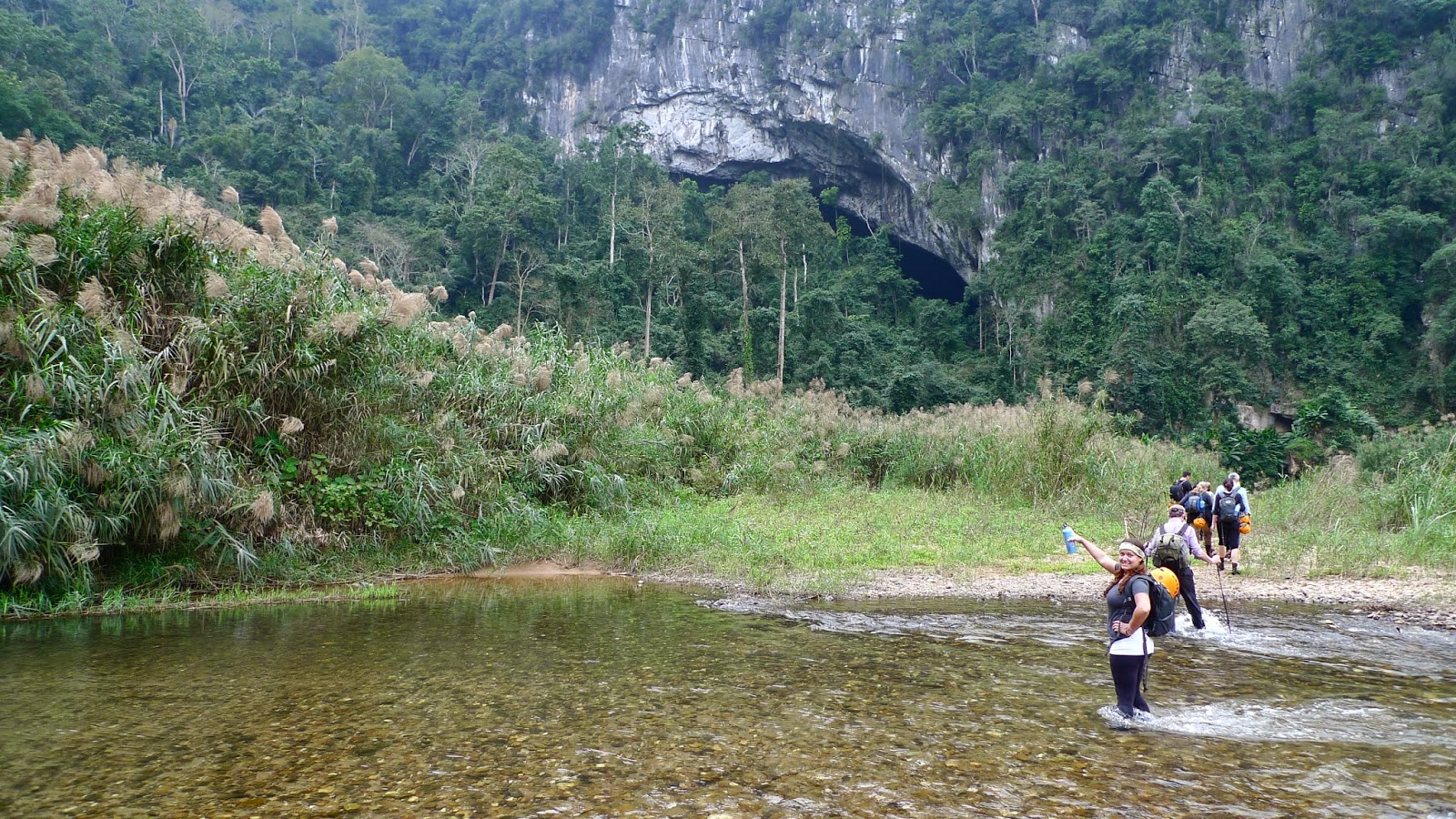 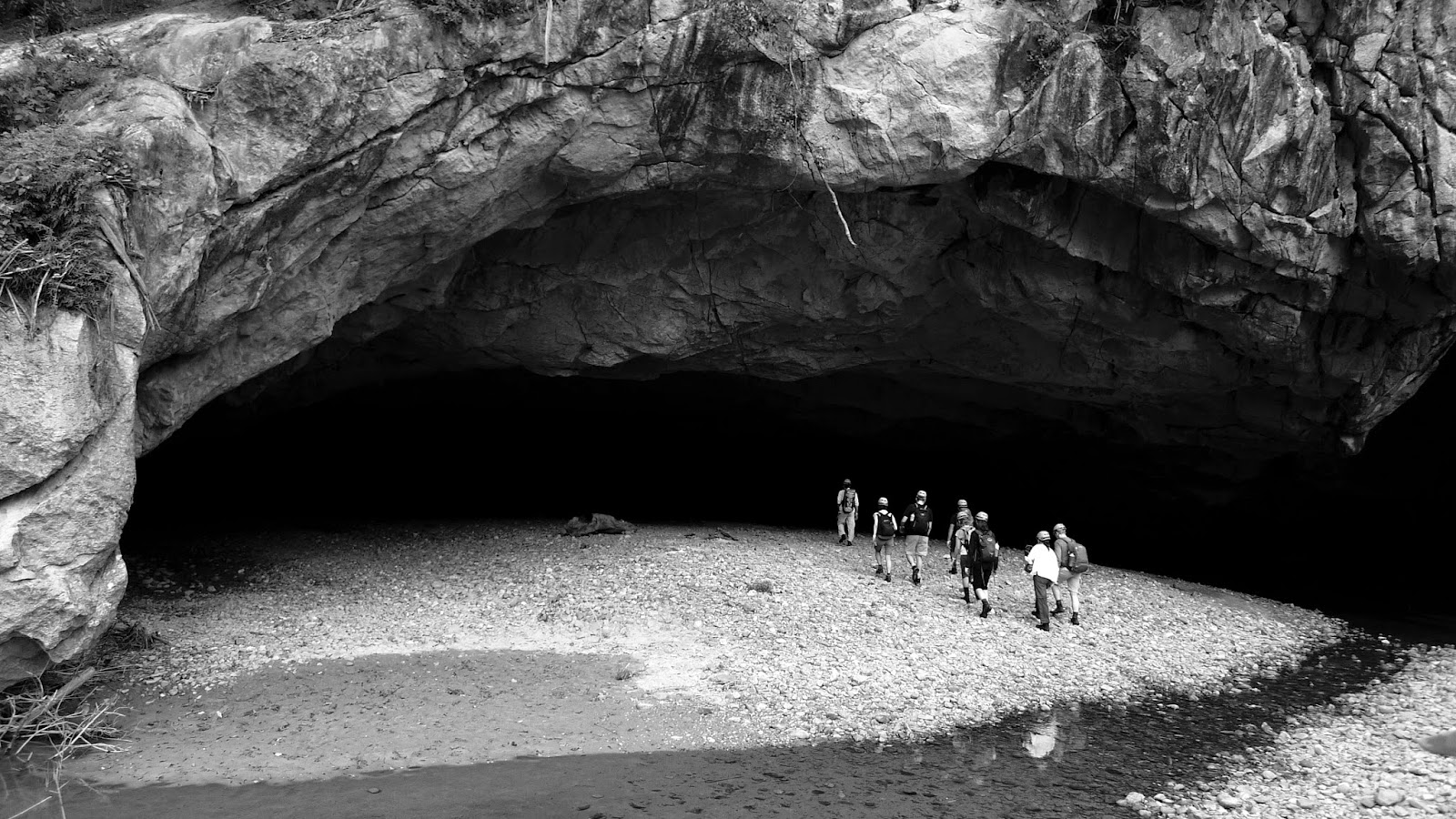 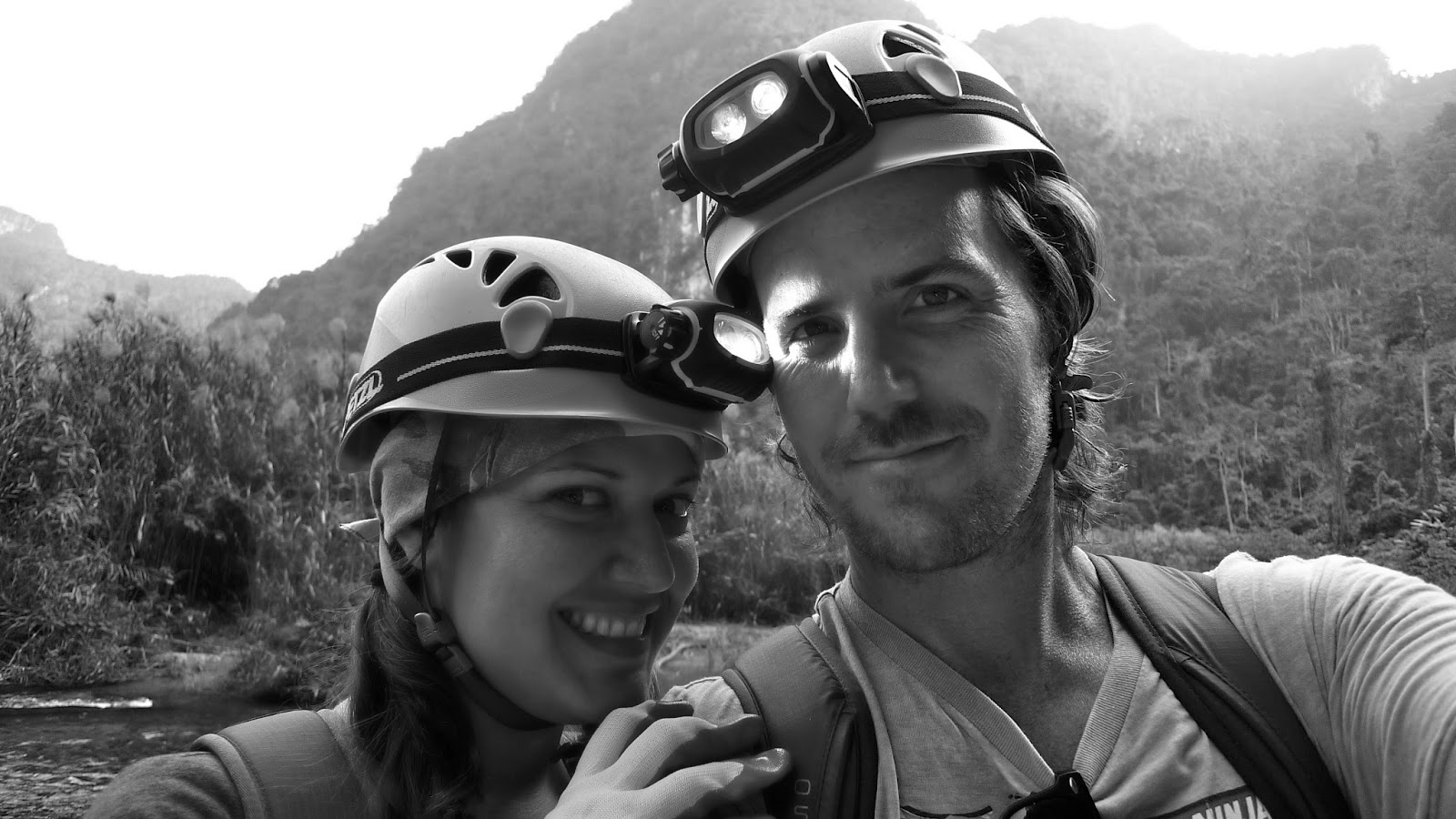 Two perfect rows of tents, dwarfed by the magnitude of the cave enveloping them. A sandy beach dipping into powder blue water. INSIDE A CAVE. Unlike anything I have ever seen anywhere else before. After everyone collected their photos, an equally strenuous decent would take us to our home for the night. 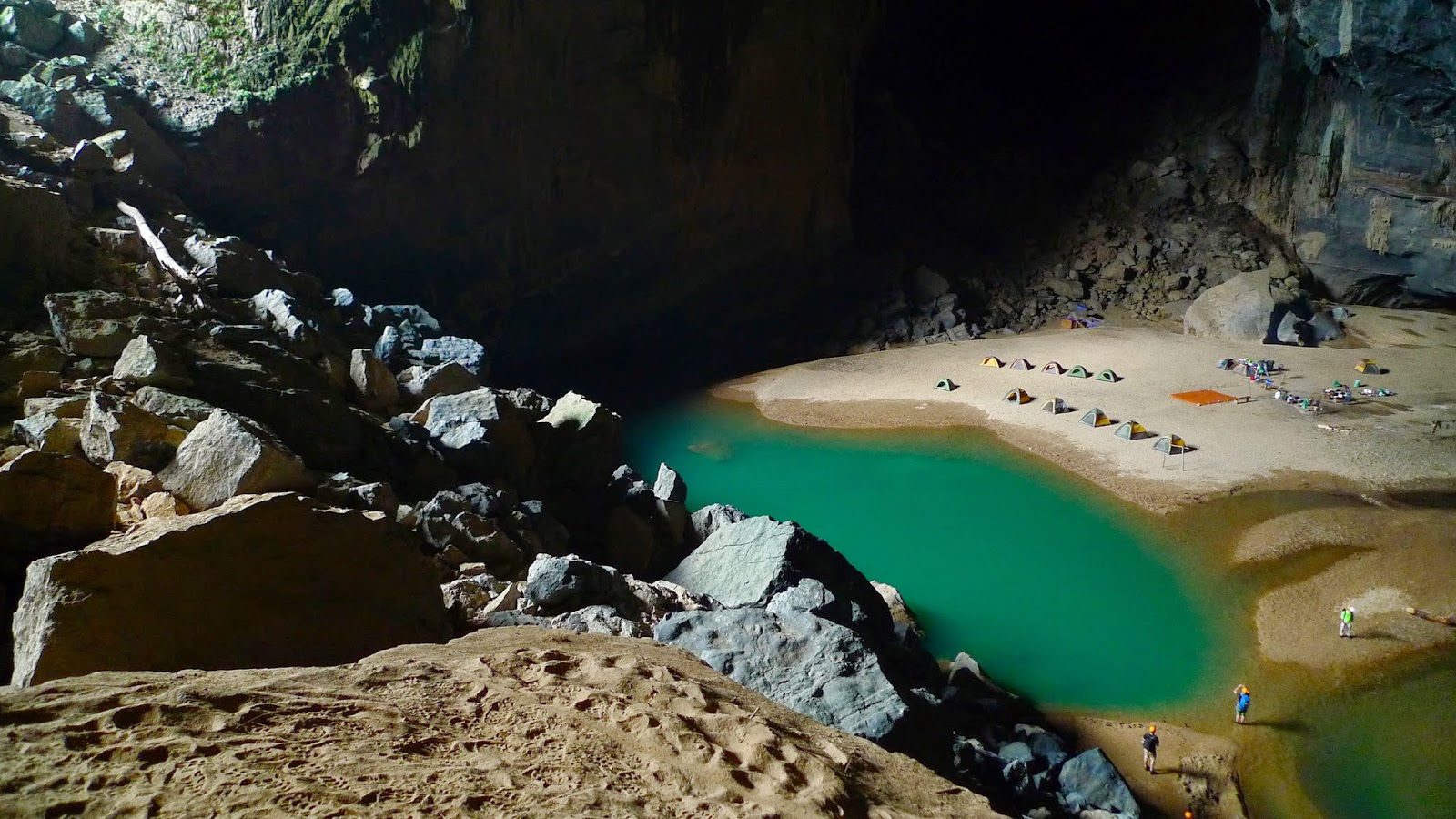 While a team of porters prepared dinner, we navigated the length of the cave to its grand exit, a 400-foot high arch perfectly framing the lush surrounding landscape. It’s scale impossible to capture on camera, if not for those teeny, tiny little specs of people on the ground, right in the center of the opening. 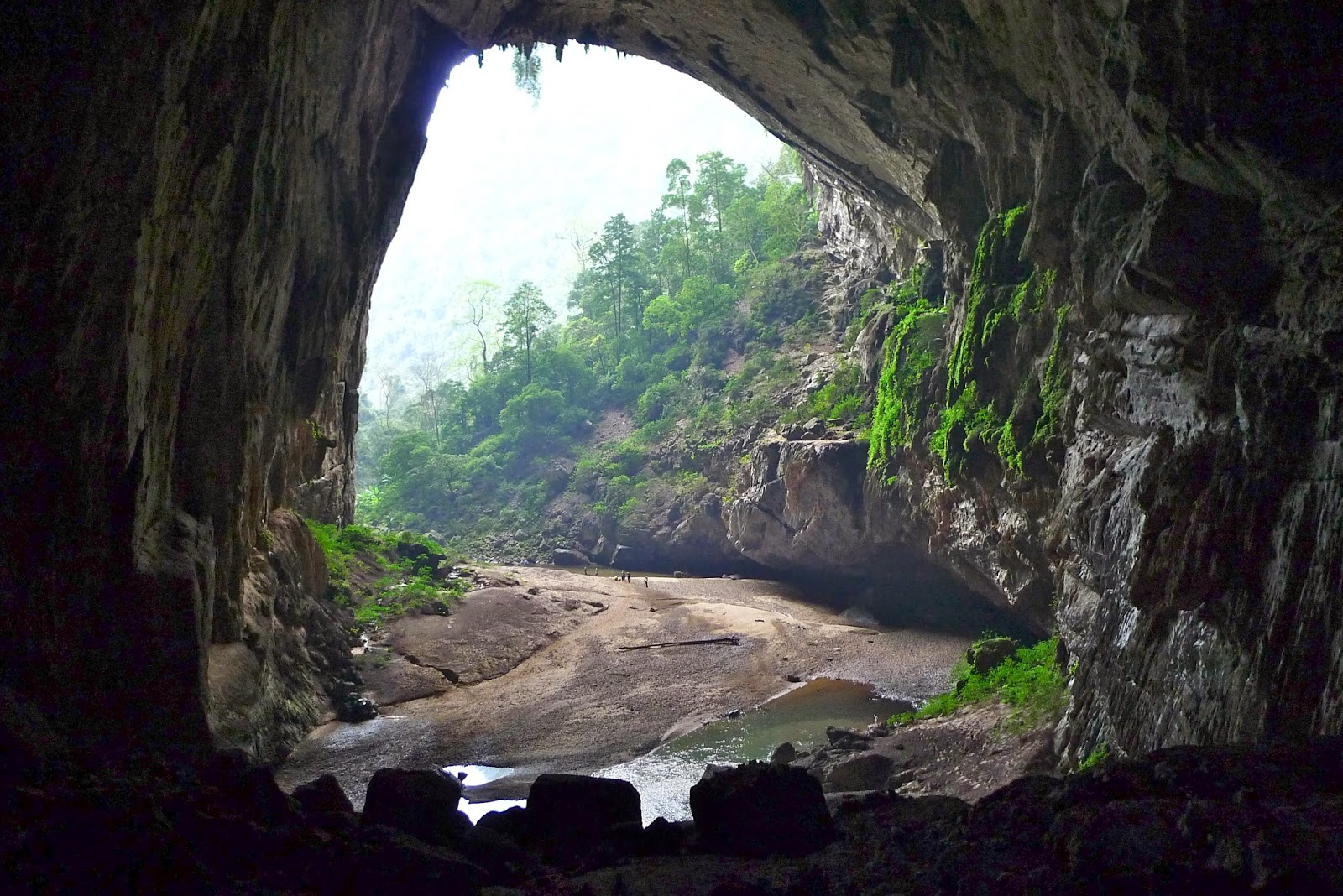 Perhaps my favorite part were these incredible little sand formations, created by water dripping from the cave’s roof far above, eroding the sand everywhere that isn’t protected by a stick or rock. It’s like a mini, accelerated version of earth’s erosion! How cool is that?! 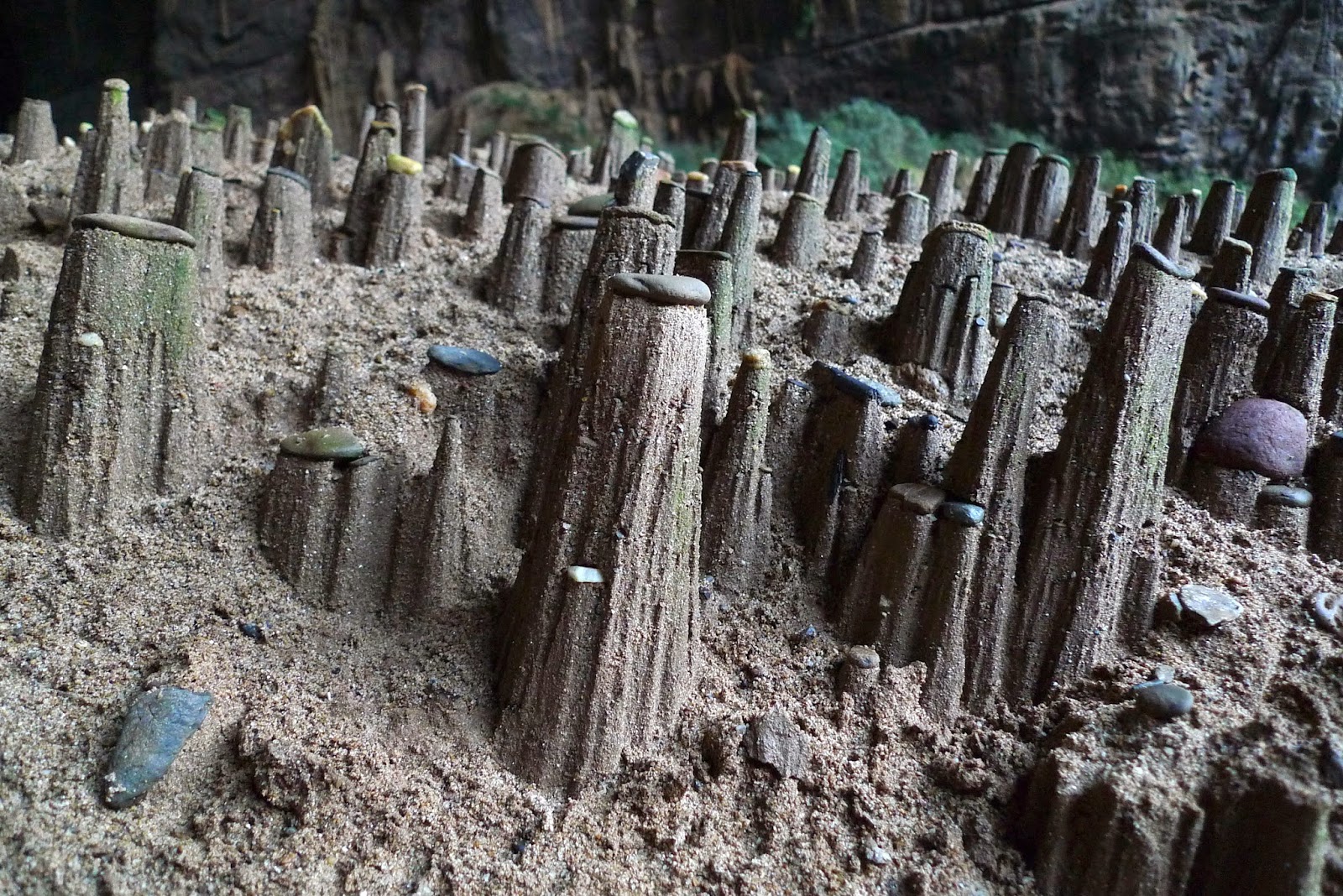 The evening progressed with a BBQ feast, seated together on a large mat while the sliver of daylight above us slipped away. Rice wine flowed and music played and thousand of swallows chirped overhead while our intimate group shared their favorite travel tales. 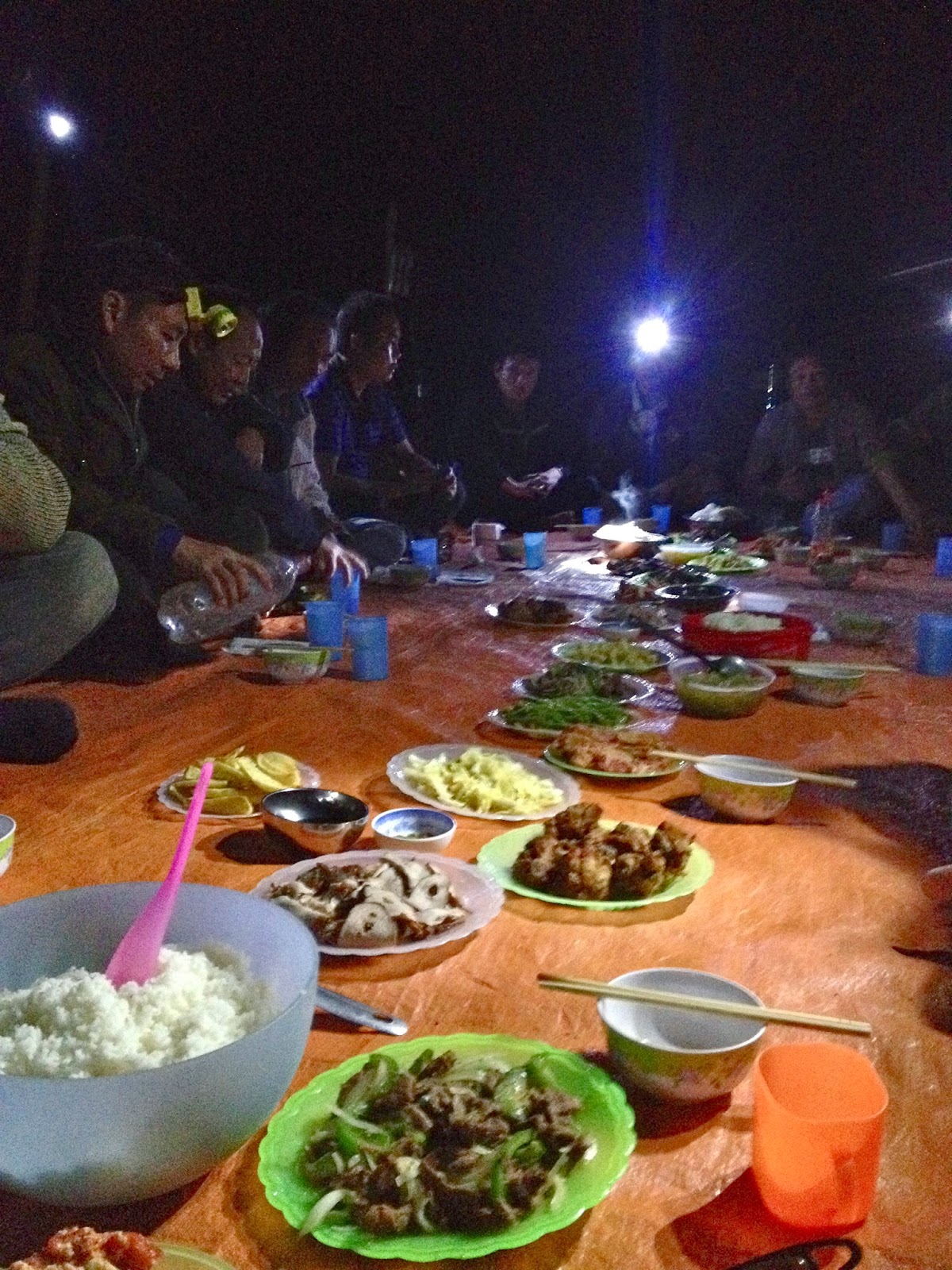 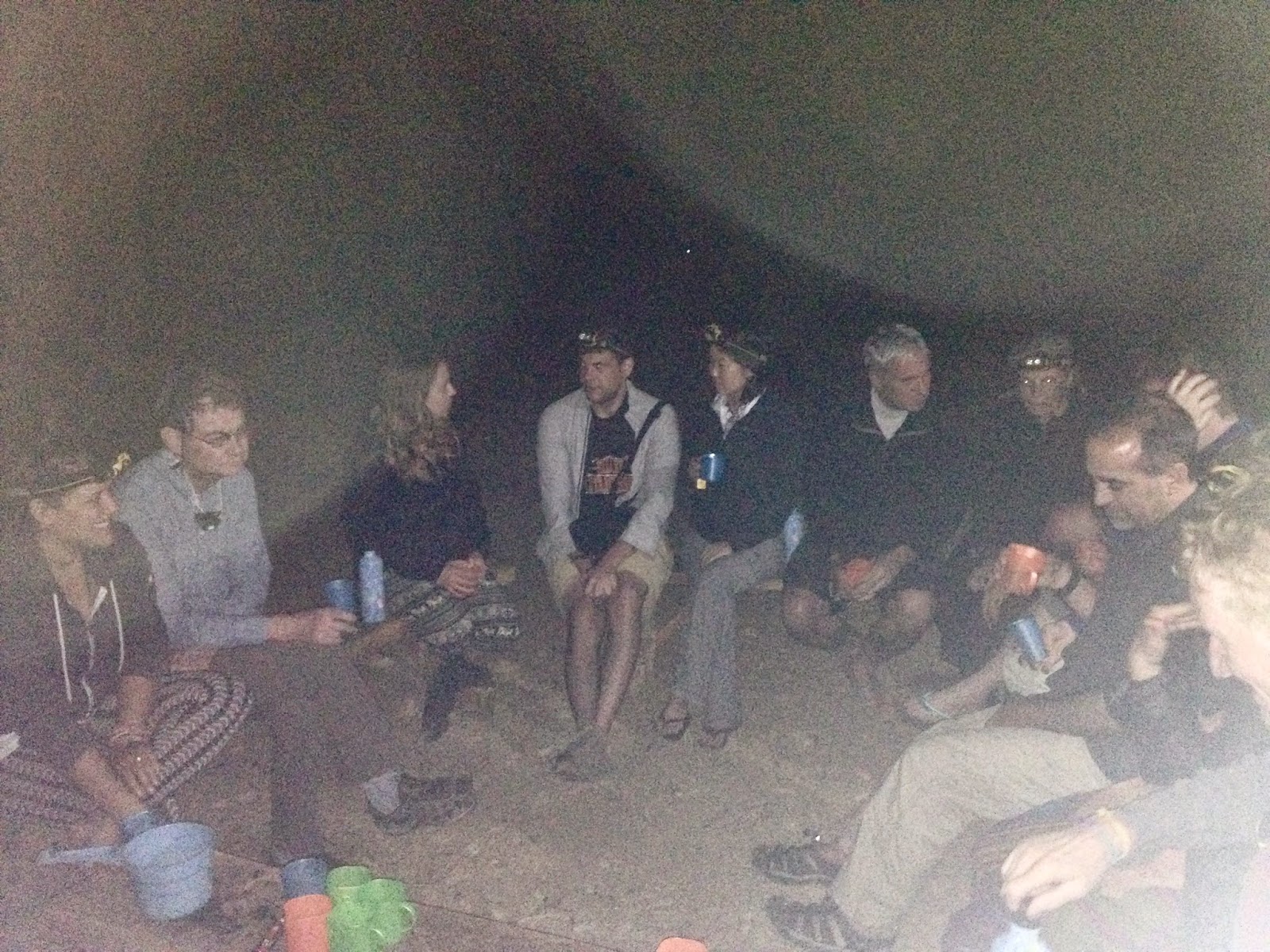 I’d love to say that we enjoyed the deep slumber of hibernating bears in our cave, but we actually tossed and turned all night on the thin mats beneath us. Nevertheless, we awoke with the suns rays shining brilliantly into the cavern, ready to take on the day. Coffee. Breakfast of spring rolls and banana crepes. Packing up and putting on our cold, wet gear from the day before. And we traipsed into the water for the first of many times that day. 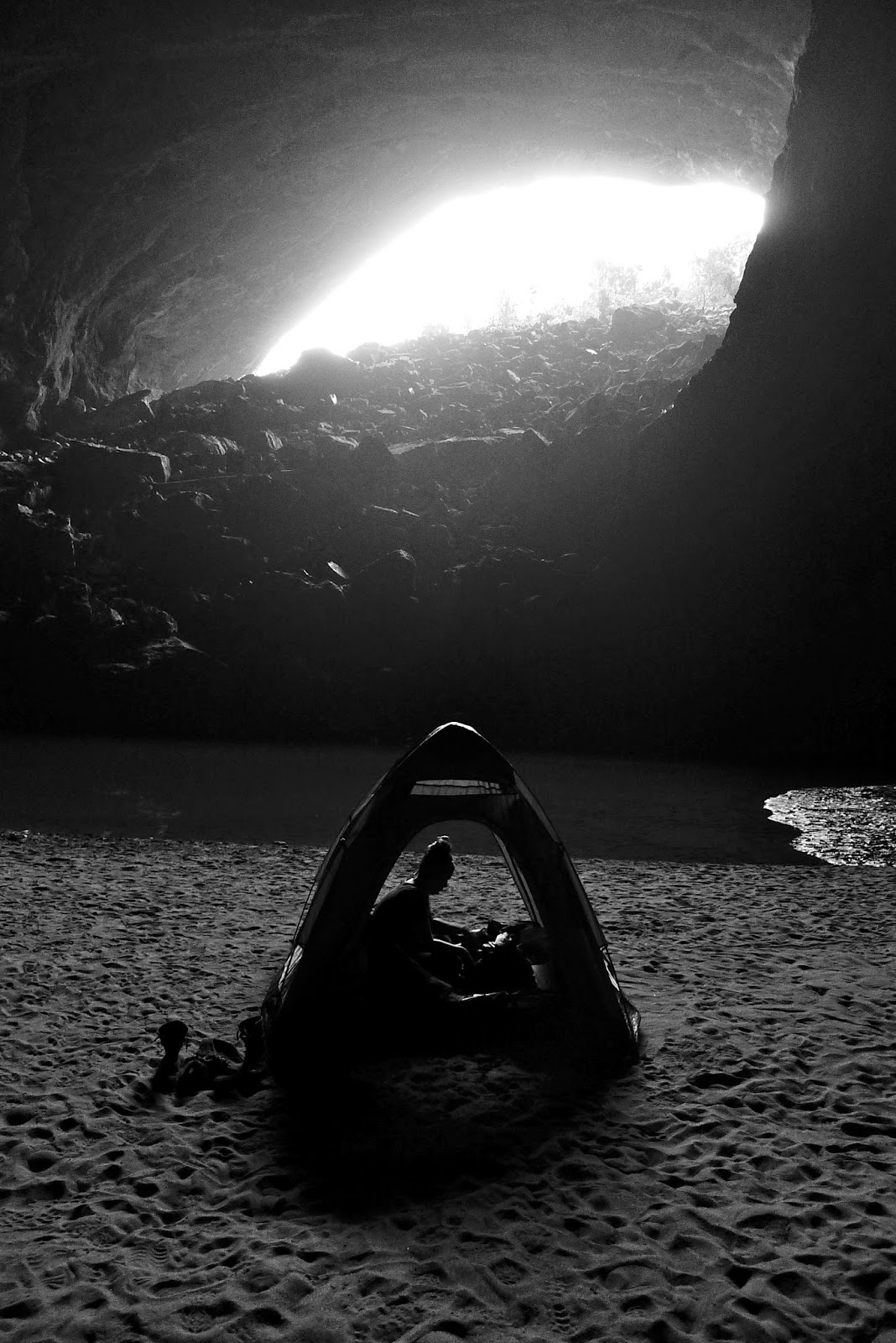 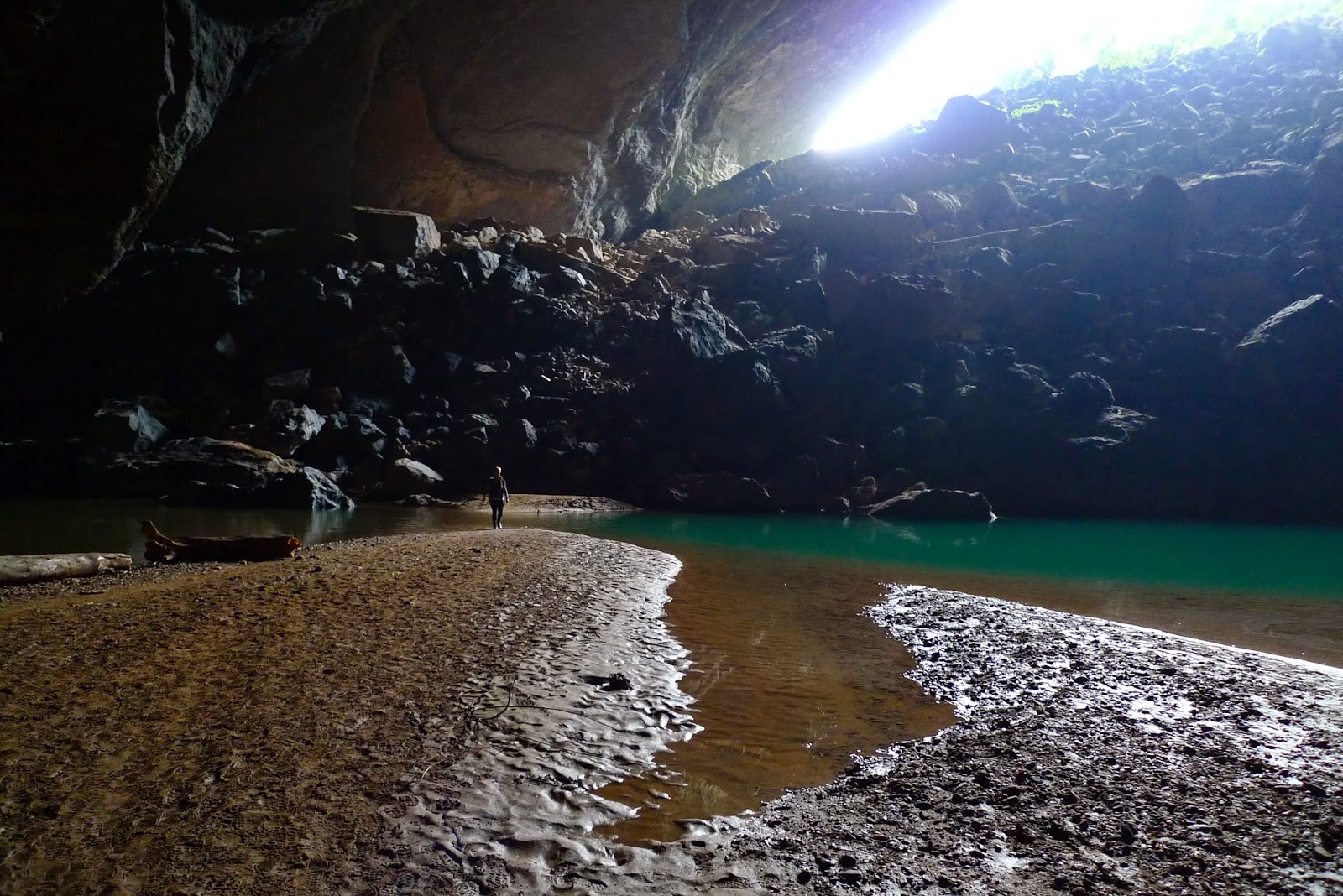 Day #2 introduced us to a jungle downpour, and the leeches that come along with it. They were tinier and much more harmless than I envisioned, but no less creepy. At lunchtime we crouched on a tarp over steaming noodles as rainwater poured down our faces and into our bowls. The final two hours – ascending the vertical path that had brought us in. Fighting our way uphill through slick mud, clinging to roots and vines, sometimes on our hands and knees as we painstakingly made our way back to the start. Huffing. Puffing. Sweating. Swearing. Until… SUCCESS!

Ice cold beers at the top never tasted so good. Dry feet never felt so good. And few experiences of our lives have ever been so good. Cheers! 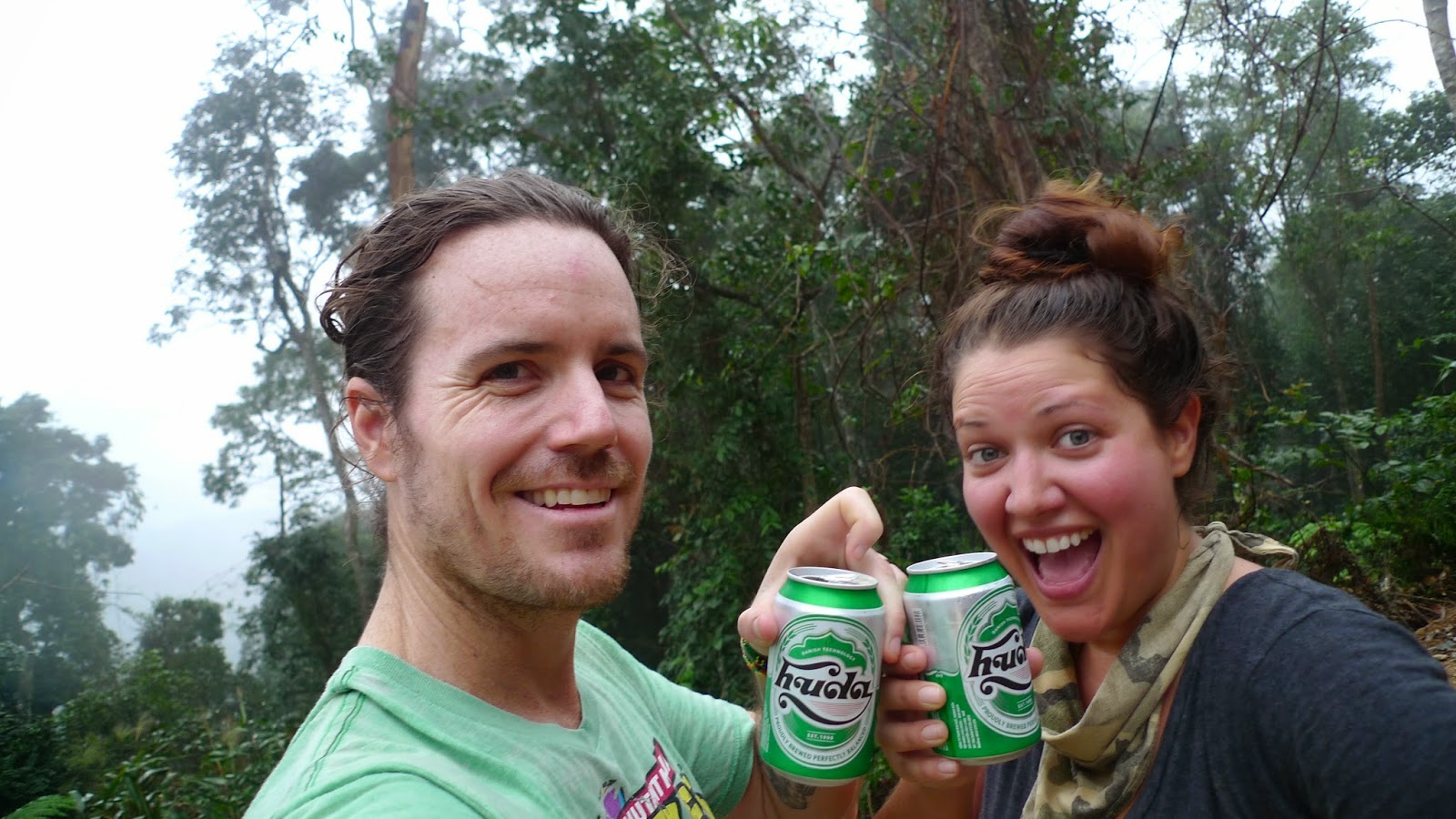 For a full album of our amazing Hang En adventure, click HERE J