Alright guys. It's time to speak up. I am told that there are a few people who actually read this thing every now and then. And I'm wondering exactly how bored they are by my accommodation posts.

I thought it would be fairly interesting to take note of the types of places we stay, the amenities and prices of various accommodations around the world. The producer in me loves to keep track of weird shit like this. But as I grow bored of taking photos of our rooms, I can only imagine the collective snore from home, "Oh great, not another hostel entry". I've gotten super lazy about documenting them lately, yet a little nagging part of me itches to keep it going.

So, here is a quick note about the last few places we've stayed, while I wait for your responses to come flooding in.

Along with our new British traveling friends (Kirstie and Hannah), we rented a fantastic, spotless little apartment. Cooking meals, watching TV on our couch, chatting on our patio, hanging by the pool... All of the luxuries that come with actually having a home (which we are admittedly, starting to miss a tiny bit). If we weren't in such a rush to wrap up South Africa and move onto the next country, I could have enjoyed staying there longer. No photos, cause I'm lazy.

A very rural, very remote collection of wood and mud huts, run by an absolute wackjob who calls himself Mad Mike. As the only four people staying at the place, we were subjected to his insanity and shockingly rude attitude with no buffer. To entertain ourselves, Reece played bartender behind the empty bar and Kirstie played DJ on the iPod deck. Then we all stared at each other for a while and decided it was time to leave. We did enjoy a day riding around in the back of Mad Mike's pick-up truck, snorkling and surfing and suntanning on Kosi Bay's deserted beaches. 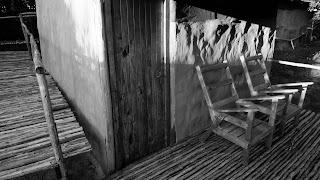 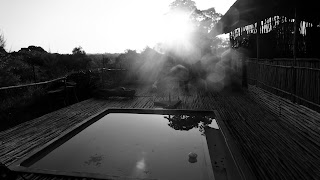 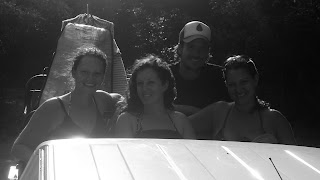 Our crazy Kosi Bay host, Mad Mike, warned us that this place is overpriced. He threatened that the owner was a shady character, only interested in money. He boasted that he taught the man how to start and run a hostel, until some business deal of theirs went sour. Yet, despite all this, he ensured us that he could get us a good deal. If we bought him lunch. When Reece jokingly responded, "How about we make you a peanut butter and jelly?" he responded with a gracious, "How about I make it more expensive for you instead?" The man was a sheer joy to be around.

We paid him for the 4WD ride to Ponta, and upon our arrival he instructed us to wait in the car while he negotiated a special rate for us. I had a pretty strong feeling this guy was not working in our favor, but we waited patiently nonetheless. He emerged with a price that was basically what we'd been paying everywhere. I wasn't impressed. We decided on a four day reservation and coughed up the cash. Reece felt badly that we didn't have enough left to get the guy lunch, so he bought him a poolside beer. (I, on the other hand, felt no remorse.)

The following afternoon, we met a lovely surf shop owner who rents out the apartment in the back of her property for less than we were paying in our hostel. It sleeps five, and comes complete with a tiny kitchen and free use of her boyfriend's surfboard. Sold. We rushed back to Kaya Kwera to see if we could get our recently paid money back. They were happy to oblige, with one small problem. Only a portion of what we'd paid actually went to the hostel. The rest went in Mike's pocket, his own personal commission for bringing us there.

We were furious. Earning a few bucks for bringing the place business is fine, I get that and have no problem with it. But to berate them for being greedy and insinuate that we owe him for the favor he had bestowed upon us - that was super annoying. Luckily, the place was not in fact greedy, and they eventually agreed to a full refund. The owner even opened a free bar tab for us in the amount of Mike's commission. And Mike can shove his peanut butter and jelly sandwich.

This was a lovely little change of pace. The apartment itself was tiny and sandy, full of mosquitos and fire ants and some cockroaches at times. However, it was steps from the beach and we began to feel right at home there. Sara and Lance were two of the nicest people that we have met, and could not have been more welcoming. In the afternoons, we kept the company of their eight year old son, Dylan, doing his home-school assignments in the garden, and their five year old daughter, Tellulah, raiding our flat for anything of interest that she may want to claim as her own. Their dog, Badger, would loyally accompany us to the beach every day and introduce us to all the neighborhood pets. We settled into their relaxing little vibe quite nicely, and really enjoyed their hospitality. On our last night, they even woke up at 2:30am to drive us to where the buses depart for our next destination. If we ever found ourselves in Ponta D'Ouro again, I would visit them in a heartbeat. 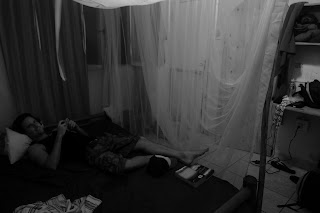 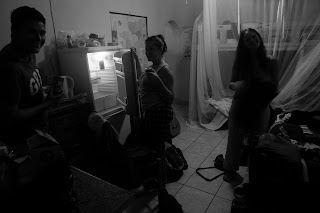 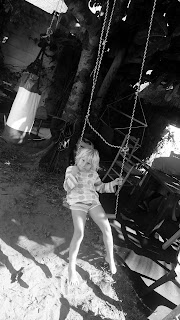