I googled the Coca Cola slogan, thinking it may be a good blog title for this photo I wanted to post. What Wikipedia taught me, is that the slogan changes nearly every year.

The most recent one on the list that I remember is: "Always Coca Cola!" Circa 1993. 1993?! Either I am really old, or really unobservant.

More importantly, how about some of those taglines, eh??

Clearly "Drink Coca Cola" didn't inspire enough enthusiasm in 1886, so they really pulled out the exclamation in the following year.

In 1939 someone at headquaters got a little too wordy for their own good. "Whoever you are, whatever you do, wherever you may be, when you think of refreshment, think of ice cold Coca-Cola." Well said. 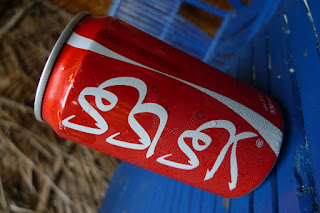