Put it on my tab.

An interesting contrast became strikingly clear today while sipping a $10 glass of wine at the luxurious Kilimanjaro Kipinski Hotel. We are totally caught in the middle of two opposing identities. Walk down the street, and folks see two wealthy, privelaged Americans. Walk into a nice hotel, and people see two poor, dirty backpackers.

It was pouring off and on during our day out and about in Dar Es Salam. To escape the rain, touts and scammers, we decided to seek refuge in the nicest building in the city. The only four star accommodation they've got, it's rooftop bar could be mistaken for that of any comparable hotel around the world.

It was surreal. In a previous life (not all that long ago), we frequented these establishments on hefty expense accounts. We know what it's like to don the fuzzy bathrobe, order the outrageously priced room service and not bat an eye. Yet here we are now, toiling over the purchase of a single round of drinks, deciding to make it our big splurge of the day.

Looking around the room, it was difficult not to feel self-consious. Rich old ladies snuck sideways glances at us in our tank tops and muddy sandals. I chuckled at the thought of walking into the Viceroy hotel bar with hairy legs and a ponytail. But the funniest part is, we COULD be staying there if we really wanted to. We have more money in the bank now than we ever had in the past, yet we are living on the tightest budget we've ever managed. It's pretty fascinating.

We toy around with the idea of treating ourselves to a place like that, just for a few refreshing days. But then you realize that three short days there could fund, literally, an entire MONTH of our current lifestyle, and it's really no contest.

It is nice to have a reminder of the things we left behind, and that we will inevitable return to after this trip is over. I am relieved to say that I still think fondly of the career I've put on hold and that I even (sort of) look forward to returning to it. Not any time soon though, of course. Till then, I'll gladly enjoy $10 boxes of wine instead. 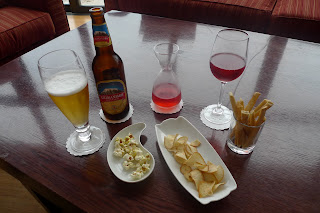 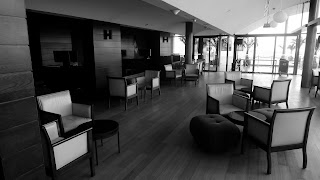