On our flight to Santiago, Reece and I watched one of our favorite shows, The Amazing Race (purchased on iTunes). All teams were departing Los Angeles (taking the same flyaway to the airport that we did) for Santiago, Chile. They then continued to Valparaiso, where we happen to be right now. I think we shall continue to follow their route around the world.

In the spirit of The Race, we had our own race-around-the-city challenge upon our arrival to Chile: Find Reece's camera. Not the one that gotten stolen of course. But an exact replica, more difficult to locate than you would think. Reece apparently has very particular taste, and we had a snowball's chance in hell of finding this thing.

Our back-up (aka more likely) option is to order it online and have it sent to my mom, who is coming to meet us in a month. But that means one month without REALLY good pictures, including our time in Patagonia. A serious bummer. (You may not be able to tell on facebook posts, but the photos on my camera pale in sad, sad comparison to the ones we can capture on Reece's.)

Reece did some research online, and wrote down directions to the "largest camera store" in Santaigo, along with some major department stores that may carry it. The camera store was just a few blocks from our hostel, which felt like an incredible stroke of luck and we started to get a good feeling about finding it there. Imagine our disappointment when we arrived, and it was basically an Apple store. They carried a few cameras behind one small case, and looked at us like morons when we asked where the rest were. If THIS is the "biggest camera store in Santiago", we're in trouble.

The guy there directed us to a Kodak store, which of course carried only Kodak products. From there, we were pointed to a department store called Ripleys who actually carried Panasonic Lumix, but not the right model. Believe it or not, there is a big difference between all of the models. I did however start to notice that the price point on electronics here are much higher than they are in the US. I began to wonder what the max is that we should be willing to pay, if we actually did ever find it.

The woman at Ripleys sent us to another Ripleys location, who also did not have it. The kids behind the counter started discussing it between themselves, then informed us that there was a Panasonic store in a mall just outside the city. He tried to show us on our map, but it was too far to be on it. He wrote down directions for us, and we set off on a half hour subway ride.

We were told when we got off at the station, to ask around and anybody could point us towards the mall. We asked around, and around, and around. Everybody gave us a different direction to walk, some said to take a bus, some said to get back on the subway. We were starting to get really tired and frustrated. Knowing that we probably weren't going to find it, we were disappointed about wasting a whole day on a wild goose chase into the suburbs.

After 30 minutes of walking and many stops along the way for further directions, we found the mall. The adrenaline started to kick in as we ran around looking for the Panasonic store. What if they ACTUALLY have it?! We approached the store anxiously, knowing that this was the closest we would ever get to a Panasonic Lumix LX3.

When we asked the woman if they carried it, she knew exactly what we were talking about. We got excited. "No." We were crushed. We asked her if ANY other store might carry it, and she started making some phone calls. We were hopeful. I offered that we'd be willing to go to ANY store in the entire country (south of here at least). After all, we have no plans for our journey south, and it's such a narrow country, how far out of the way could any city be?! She hung up the phone and went in the back. Reece and I held our breaths, imagining the possibility of her walking out with one. She came back empty handed. Another phone call. This time we couldn't understand what she was saying, but her tone sounded promising. Another trip to the back. At this point our desire for it was overwhelming. And she walked back out, box in hand! They have it! ONE left!!!

My next question of course, was the price. Nearly twice as much as it is in the US. A devastating SEVEN HUNDRED AND FIFTY DOLLARS. I almost passed out. We stepped aside and weighed our options. While it is currently selling on Amazon for $400, we originally paid $500, which is what our insurance company will (hopefully) be reimbursing us. So that means an additional $250 out of our pockets. We went way over budget in Brazil, and are really trying to get back on track, and that won't help us any. Reece looked at a few more (cheaper) Lumix models, but I knew we would never be as happy with any of them.

In the end, we looked at it this way - What is a few day's budget compared to one month worth of pictures? One...five...hell, twenty years from now, when we look back on the photos from the trip, are we more likely to wish that we had been able to adequately capture the rest of South America, or that we had an extra $250 in the bank? We plan to make photo books, blow up prints to frame in our house, etc. and I knew we would always regret "the month that got away". Oh, did I mention the camera was an open box, and thus $100 off the regular price of $850??

We decided that we were not led on this path through the city, to a Panasonic store in a mall we never would have found on our own, to the very last camera on stock, discounted $100, to go home empty handed! 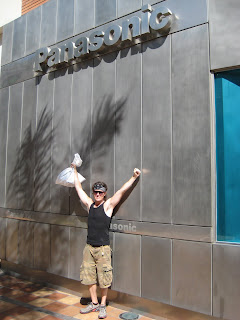