If you don't know what that means, I will assure you that they are two words you never want to hear at a sporting event.

I make no secret of the fact that I hate sports. Having a die-hard football fan as a boyfriend, I have learned a few things about making them bearable. Well, one thing really. Nothing eases the pain of watching sports like drinking beer all afternoon. As I say at every Hurricans gamewatch he drags me to, "I hate football, but I love day drinking." They go together like Brazilians and bikinis.

Despite my sports loathing, I was excited to go to our first futbol game in Brazil. The stadium itself is meant to be a spectacle, the fans are out of control, and (don't tell Reece) at least soccer isn't QUITE as boring as football. It's such a giant part of the culture here, we couldn't leave without checking out a game. And lucky us, we happen to be here during the semi-finals.

Our adventure began three hours before the game was scheduled to start. We figured an hour of navigating the subway system to get there, and a two hour advance arrival to buy tickets.

I'll tell you, the ride there alone had me questioning if we were taking our life into our hands. It was packed like nothing I have ever seen before with an aggressive, rowdy crowd. Literally, there was an elbow or sweaty back or armpit inches from your face at all times. At each station, as another massive crowd tried to jam themselves onto the train, people would shout and shove and bang on the walls in fury. Stop after stop as we neared the stadium, each with a larger crowd than the last, near riots breaking out every time the doors opened. At one point a kid got shoved off the train as the doors were closing, and his mother had to scream at him from inside to stay there till she could come back for him. Insanity!

After getting off at wrong station to make our connection, we had to fight the crowds again to earn a spot on the following train. Eventually we made it to the stadium in one piece, the only casualty being my sunglasses. By now, two hours had passed since we left the house. A ticket booth was nowhere to be found, so we joined the masses of scalpers and tried to gather if any tickets were being sold for the maximum price we were hoping to pay, $100 Reals (about $25 per ticket). We mistakenlly tried to buy tickets from a guy who was only selling beers. We ran into a friend who told us they just bought two tickets for $300R. It wasn't looking good.

We were finally approached by a guy with two tickets. We haggled him down to our $100R goal (no small feat when we don't speak the language), which was the face value of the tickets. Either we just got totally scammed, or I have no idea how these guys make their money.

Making our way through the crowd again, we approached the entrance holding our breath with tickets in hand. Success!! We were in and to our seats (which we were very happy with) in no time. Time for some beer!!

"CERVEJA S.A." it read on the shirts of the vendors. "S.A."? What the hell is "S.A.?! Wait a minute... NON-ALCOHOL BEER??? They don't serve or allow any alcohol inside the staduim!! Why, in all of the research I have done about every freaking thing that we do, was I not aware of this very important detail?!

So, there I was. Sweating in the late afternoon heat. Approaching three hours of sports watching. With not a drop of beer. Outrageous.

There's not really much else to say.

Oh yeah, the game. It was fun. Best part was witnessing the crowd. Flags and fireworks (IN the stands!!), cheers and songs, balloons and confetti and and these GIANT banner/flag things that the crowd would pull up and over themselves, like waves washing ashore at the beach, covering entire sections of the stadium. Really cool to see.

Neither team scored a single goal, so it came down to a shoot out. Each team, with five chances, scored five goals. At that point it was sudden death, each team kicking once more before Fluminese missed a shot. As avid Vasco fans (aka we were seated in their section), we couldn't have been more pleased. The crowd...went...WILD. I suggested that they should have skipped all that running around and went straight to the shoot out, since that's all that mattered anyway. I get the sense nobody in Brazil would have agreed with me. 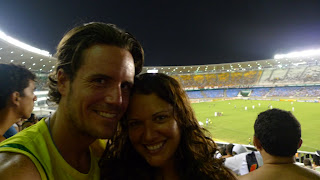 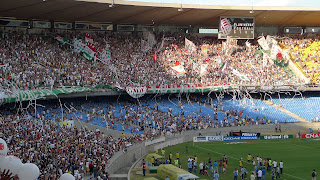 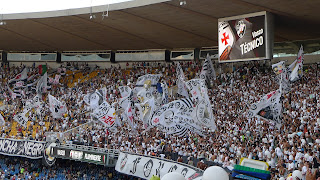 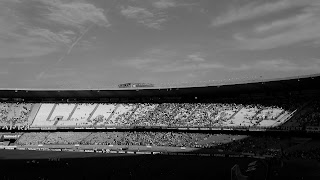