As some of you know, there was a bit of an issue surrounding my ability to get into Brazil. We had been receiving conflicting information for months surrounding our need for the official immunization card proving we had been vaccinated for yellow fever. Reece's doctor told him he MUST carry it with him. Mine did not. The woman who sold us our flight to Rio said we ABSOLUTELY must have it (she couldn't stress it enough). The woman at our hostel said we would not. I read somewhere you only needed it when coming from a yellow fever zone - Bolivia being one of them, Argentina not.

Since my healthcare professional had not informed me of any significance attached to this little yellow slip of paper, I left it at home. We decided we must do our best to get the thing into my possession. Knowing of course that if I had it, I probably wouldn't need it, and if I didn't, I most certainly would.

From Bolivia, we made a reservation at the final hostel we'd visit before crossing the border, on the date which we hoped to arrive. My sister came to the rescue and arranged to have it delivered via international FedEx. A whopping $68, and a guarantee that it would arrive by January 30th.

Well, you don't have to be a scientist to conclude that it did not in fact arrive on the 30th. Or the 31st (which is the day we arrived). Or the 1st. We were scheduled to cross the border on the 2nd, and had quite a little dilema on our hands. Do we stick around and wait for it, and risk missing our flight (from the Brazilian side of Iguazu) on the 3rd? Or do we attempt to cross the border without it, aware that if we were successful we'd never see that yellow card again?

I did a little research and found that we may need the card again in Africa. And I'll be damned if we're gonna waste the $68 my sister spent getting it to us, just to leave it behind. We tracked it, we Skyped FexEd, we interrogated everyone in reception. We were getting lots of conflicting bits of information about where it could possibly be, but nobody seemed to be able to pinpoint it. Then we did the last thing we possibly could do given the situation - sat by the pool and drank a bottle of wine.

The morning of the 2nd, I was pretty stressed out. The girl at reception still insisted it had not arrived. FedEx continued to insist that it had. I managed to get through to the international customer service folks, who said the package had been signed for by one "S. Shamma" on January 30th. That would have been pretty amazing, considering I was in Salta at the time. During one last frantic, outraged call, a man walked through the front doors holding what Reece identified from across the lobby as a FedEx envelope. Hooray!! FedEx may have lied to me, and I may have been uneccessarily harsh with some front desk girls, but now the card was MINE! We celebrated with a relaxing hour in the pool, then packed up and confidently headed for the border. 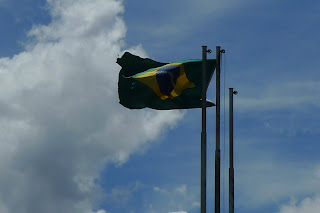 I would desperately love to report that the immigration officials carefully scrutinized my yellow immunization card. That they pulled me aside and checked it twice, just to make sure it was legit. That they called their colleages over to bear witness to the fact that I was fully vaccinated.

But alas, none of these things happened. I approached my turn in line like an eager college girl on her 21st birthday, anxiously waiting to be carded. And I was breezed through without the bat of an eye.

Perhaps I should have tried a fake ID. That used to work every time.
at 10:21 AM