It's not very often you have a meal that's good enough to write home to mom about. In our 2.5 months of travel, four dining experiences stand out to us above all others. When eating out just about every day, I think that's a pretty special destinction. So, I've decided it's time to start writing home about them.

The first two, I would say, are quite unexpected.

- Thai food in Cusco, Peru. You didn't see that one coming, did you? I don't even remember the name of the restaurant. But the steamed dumplings and musaman curry with coconut rice were absolutely to die for.

- Indian food in La Paz, Bolivia. Even stranger, no? I'm pretty sure the restaurant was called Star of India. It was run by a British guy, so you know it's gonna be good. Best saag paneer I have ever hd the pleasure of tasting. Out of this world chicken tikka masala. The naan and raita were pretty average, but my socks had already been knocked off so who cares.

- Our third noteworthy meal was the Brazilian steakhouse experience in Rio. Which I've already described in mouth watering detail.

- And most recently, El Chalten, Argentina makes our list with Estepa Resto & Bar. The eight hour hike that presceded this meal may have whet our appetites, but holy molehill it was delicious. The onion cream soup with a giant mound of freshly baked bread could have stood on it's own, but the entrees to follow are what really stole my heart. A malbec soaked filet mignon. Pumpkin sorrentinos (giant raviolis) with four cheese sauce (yes, blue cheese was one of them). The two went so perfectly together that I wanted to approach every arriving party and advise them that there is no need to look at the menu, THIS is what they must order. 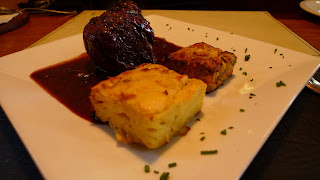 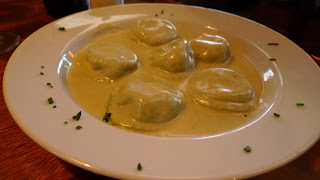 Pair that with superb and affordable Patagonian wine... YUMMMMMMMMM. Two enthusiastic thumbs up. 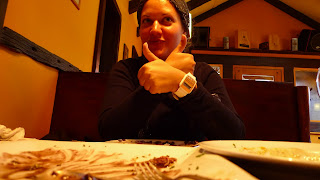