We had a hard time tearing ourselves away from Chintsa. Surfing, beer pong, candle-lit dinners, afternoon naps in a breezy tent to the sound of the ocean. After just three blissful days, we decided it was time to move on up the coast. And now, we have finally found ourselves in the "real" Africa. Up to this point, South Africa has reminded us a LOT of California. Beautiful, to be sure. But not very "foreign" feeling. En route to Coffee Bay, we began to see glimpses of the Africa we imagined before touching down in Cape Town.

The Baz Bus dropped us off at a gas station off the main highway, where a shuttle was awaiting us for the two hour journey to our hostel. Swerving past cows and donkeys, around potholes the size of station wagons, our fearless driver expertly snaked his way toward the coast. Through tiny villages and vast farmland. Barefoot children chasing chickens in a field, looking up to wave with curious excitement at our passing van. Woman transporting massive buckets of water on their heads from the nearby well. Uniformed kids piling in the back of a beat up pick-up truck for the ride home from school. Men gathered around small local taverns drinking xhosa beer. And, as far as the eye can see, hillsides dotted with round mud huts painted in bright pastel shades. There was a beauty in them so captivating, I realized, because it's the first time in a long while I've seen something so different from anything I've seen before. As the sun set and cast a golden glow over the rolling hills, we felt like we've finally arrived. 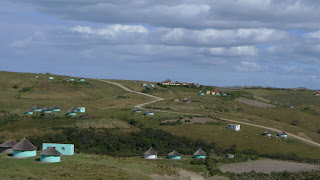