Whenever the subject of drunk food comes up, Reece speaks adoringly of a treat he and Nevin used to enjoy, called Cochinas. For years, I have countered with disbelief. There is no way that they are called "Cochinas"! For those of you who don't know, the literal Spanish translation of cochina is "female pig", but as a slang term it more closely refers to a "pig of a woman, typically with loose morals". Why on earth would any restaurant fry up and serve bite-sized balls of shredded chicken and cream cheese named after a filthy whore? Reece surely must have been too drunk to recall the actual name. But still, he insisted.

Having arrived in Brazi, the mystery has been solved. Every bar and street corner juice stand in Rio sells the infamous snack, and they are called "Coxinhas". Ah! It's in Portuguese, NOT Spanish! It all comes together.

I feel much better now about how many he used to eat every night in college. 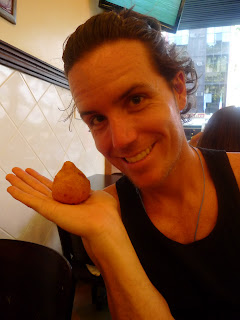