If the golden panoramic view of Jaisalmer wasn't captivating enough for us, Jodhpur's fort offers stunning views over this "Blue City". The periwinkle shade compulsory of all buldings within it's walls is said to both keep interiors cool, and look pretty cool from above. 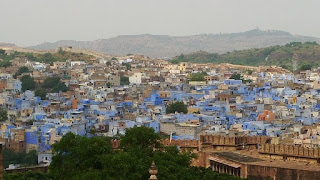 Still run by the decendants of the Maharaja, Mehrangarh fort is an architectural marvel. Perched on a steep hill overlooking the city, it appears to grow organically out of the rocks upon which it was built. The sheer drop down the outer walls continues down the sharp cliff's edge, making it seem impossible that the massive structure is still standing.

Blessed with a beautiful day and surrounded by kind people and great energy, we had a really good time exploring Jodhpur and it's fort. We were also granted celebrity status unlike any we could have dreamed of in Egypt.

Many of the people visiting the fort while we were there were stopping by during the religious pilgrimage mentioned below. Hailing from the countryside, these folks don't come into contact with many tourists, and were absolutely elated to have the opportunity to meet us. Groups of 20 or more surrounded us, jumping in the air to be captured in one of the many photos being snapped. Timid schoolchildren would tiptoe over to shake our hands, then run away in a fit of giggles. Mothers thrust babies at us with open arms. Every direction we turned revealed someone with a camera phone hoping to capture an image of us walking by.


It was less annoying then one might expect, cause everyone was just so darn nice. And the funny thing is, we want pictures of them as much as they do of us. 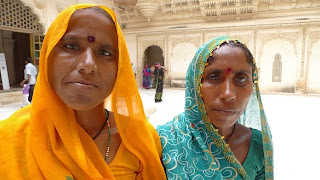 We found especially amusing the folks without a camera, who asked to pose for a shot taken with ours. They didn't wish for us to email it to them or anything crazy like that - they'd just look at the photo, beaming, then thank us and walk away. 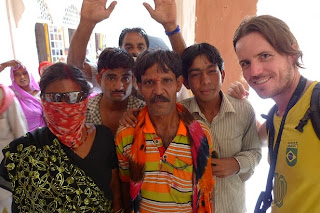 On our way out, I was invited to join the two-man band playing for visitors. As you can imagine, this attracted quite the attention. Good times were had by all. 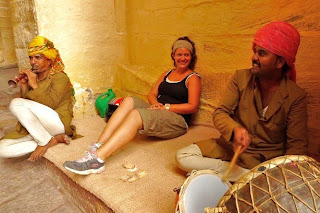 For more photos from Jodhpur, click HERE.
at 7:23 AM