We've learned something very important on this little Nile cruise... We hate cruises.

You know how I feel about being part of a tour group. The need to report to certain places at certain times. Contact with locals reduced to the touts trying to sell you crap. Sites seen from behind twenty seven bobbing heads. It reads a bit more "field trip" than "trip around the world". 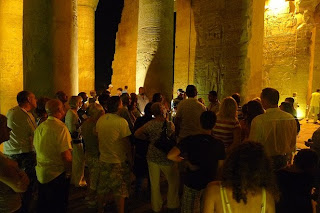 A cruise, in my humble opinion, is like being in a tour group surrounded by a moat that keeps you from ever leaving the confines of your pre-packaged holiday. Receiving your morning wake up calls. Getting shoved aside at each port of call by the folks who want to be the first off the boat. Eating the same meal served eight different ways at the same table in the same dining room with the same sunburned people day after day. It feels a bit soulless and generic.

Reece and I were contemplating why we're so turned off by it. After the bed-bug infested hostels we've experienced, you'd think we'd be thanking our lucky stars and kissing the freshly buffed marble floors of this ship. Surely, sleeping under an actual comforter and having a toilet with an actual seat are luxuries we appreciate. Still, something's amiss.

We have a romatic notion that this trip has begun to instill within us a sense of unification with those around us. Each and every day is filled with numerous interactions - be it the pleasantries of getting to know another traveler, the philosophical chat with a fellow waiting for the train, the religious discussion with the man at the Indian embassy. Our life has become a routine of exploring not just places, but people. There is a certain joy in deciphering the erratic hand gestured directions to the nearest temple, helping an entire family pile onto the back of a motorcycle, eating unidentifiable treats from grinning sidewalk vendors. A cruise has a way of wiping your trip clean of all of these things.

Don't get me wrong, we had a great time. But now that it's behind us, we're really excited to hit the pavement again.
at 1:43 PM