While in the North Coast of Egypt, we had the opportunity to attend a real live concert.  Performing was a gentleman by the name of Amr Diab, who, according to my cousin, is "the most famous singer in the world!" 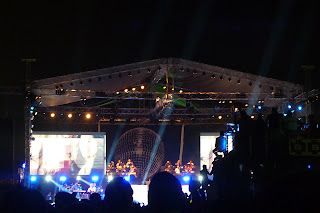 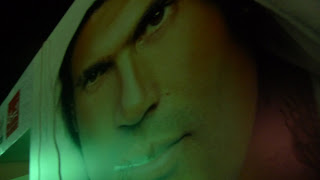 We may not have been as excited about the headliner as she was, but were eager to see what all the fuss was about. After 15 minutes of enjoying the fanfare, we went to a nearby cafe to smoke some sheesha.

Well, turns out this guy is in fact pretty darn popular over here.  Billboards promoting his latest album are everywhere, as are magazines with his coy smile gracing the cover.  We realized that there are alot of folks who probably would have been more grateful to have those concert tickets than we were.  But what we did not realize, is that having been in the vicinity of this man would give us instant street cred across the country.

The souvenir vendors in Dahab are pretty ruthless with the hassling, and many believe that asking you about yourself will lure you into their store.  "What is your name?"  "Where are you from??"  "Who is your favorite singer?!"  Reece thought it would be funny to tell one guy that he fancies Amr Diab.  Holy moly, this guy almost fell out of his chair.  He leapt to his feet with excitement, "You know AMR DIAB?!?!"  We proceeded to tell him about our experience seeing him in concert, and I swear this poor kid almost had a heart attack.  He dragged us inside and pulled out his personal shrine to Amr for us to admire.  He produced chairs from the back of his store and sent some kid scurrying to fix us hot tea.  We were immediately his guests for the evening, and he probed for every detail about seeing this fantastic man in person. 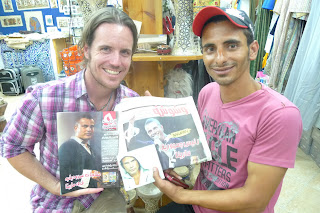 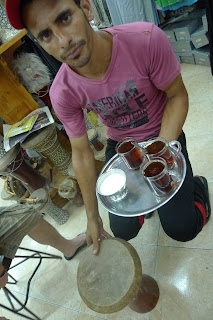 Convinced he wants to marry my cousin for her shared love of Amr Diab, he has decided to become our best friend.  "Tell her father I will speak to her about nothing but Amr Diab!  I don't want to talk about ANYTHING else!!"

We may not have made a love connection, but we did get a great deal on some knock-off board shorts out if it.
at 7:22 AM