Day Two of our Nile Cruise 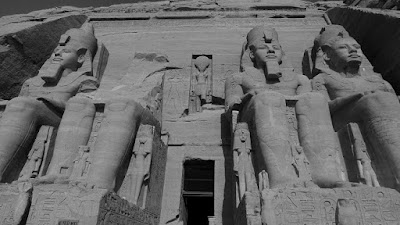 A visit to Abu Simbel, 200 miles from Aswan, has a way of TOTALLY redeeming any disappointing events of the day before. Another site which I had read about in a fellow traveler's blog, this was the main attraction I hoped to see in the region.

This temple, built over THREE THOUSAND years ago, can only be described as colossal. The entrance is gaurded by four awe-inpiringly huge statues of Ramses II carved out of the side of a mountain, overlooking shimmering Lake Nasser and intimidating the hell out of any person who may have approached while cruising down the Nile. The impact of standing small before these towering works of art is truly a powerful one. 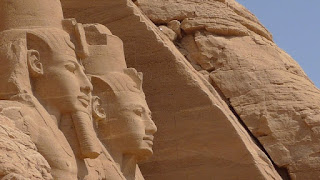 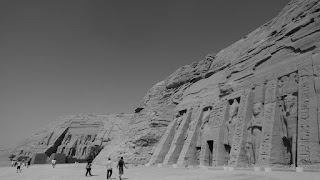 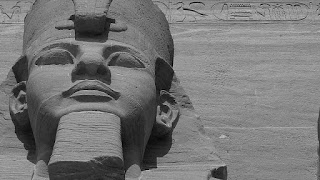 Interesting factoids:
All overland travel in this region must be done as part of a convoy, complete with police escorts, making independent travel virtually impossible.  To visit Abu Simbel, this means departing at 3:30am sharp.  Apparently, since the site is just 30 miles from Sudan's border, they aren't F-ing around with tourist's safety.

Between 1961 and 1968, threatened by the rising waters created by the High Dam, Abu Simbel's temples were relocated. Forty million dollars of UNESCO's money was spent to cut the entire site into large blocks (averaging 20 tons a piece), dismantle, lift, and reassemble on higher ground. This feat is considered to be one of the greatest challenges of archaeological engineering in history. Here's a scale model of the original and new location, relative to current water levels.


It is believed that the ancient Egyptian architects positioned the temple in such a way that twice each year (61 days before and 61 days after the Winter Solstice), the rays of the sun would penetrate the sanctuary and illuminate three of the four sculptures inside. One however always remained in darkness: Ptah, the God the Underworld.


In the decades after Ramses II death, the temples eventually became neglected and mostly covered in sand. They were rediscovered in the 1800s by some French dude, and quickly attracted tourist attention.  From what we gather, looks like people have been incosiderate jerks for over a hundred years.